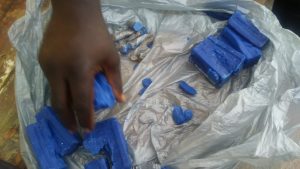 The marijuana that Guyana Prison Service authorities said were concealed in the blue soap to be smuggled into the Lusignan Prison.

A woman, who allegedly attempted to smuggle marijuana in soap to her fiancé inside the Lusignan Prison, was Tuesday arrested, Director of Prisons, Gladwin Samuels said.

She has been identified as 20-year old Althea Douglas.

Samuels said the woman was arrested shortly after 3:30 pm after “her efforts to smuggle marijuana in blue soap failed.” He said the woman was nabbed while she was preparing to visit her fiancé in the holding bay at the East Coast Demerara penitentiary.

“Alert officers on duty conducted a detailed search on the soaps and found the marijuana concealed therein. Police weighed the contraband which amounted to 19 grammes.

Samuels used the opportunity to warn the public to “desist from smuggling prohibited items into the prison as they are serious consequences to such actions.”

In the past, prison wardens have been arrested and charged for smuggling marijuana and cigarettes into the nation’s jails.