School of the Nations Principal hands over recording to police, US embassy; calls for “pressure” on American mission 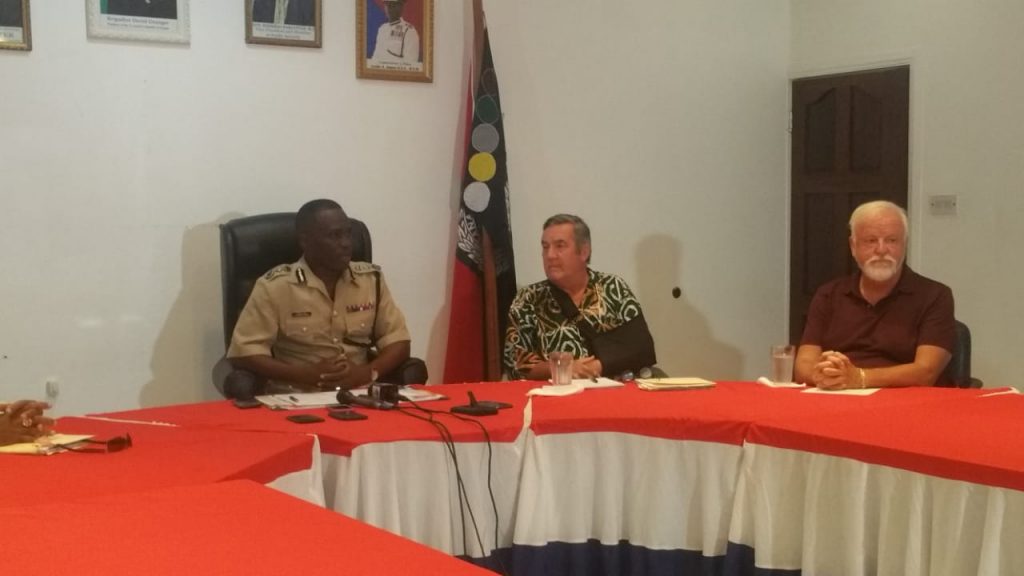 Police Commissioner, Leslie James and Principal of School of the Nations, Dr. Brian O’Toole (centre) at the joint press conference. The Police Commissioner said the media engagement was called to dispel a number of “inaccuracies” and address “anomalies”.

Principal of School of the Nations, Dr. Brian O’Toole has provided an audio recording of someone he believes Guyanese police can use to crack a shooting incident that has caused his left hand to be semi-paralysed.

“It’s actually of a very clear message that came only a few days ago from a person of interest – and we have the recording, I have given it to the police, I have given it to the American embassy – that is gloating about the killing, that when he shot the man, he did the dance, then he said how wicked is that, then he laughed,” O’Toole told a press conference he shared with Police Commissioner Leslie James.

He said the 30-second audio recording reveals that the person “knows what is going on and it shows that the guy is sick” because he gloated and laughed about it. The educator made it clear that he did not know if that person actually shot him in his yard on January 27. Hours before the shooting, a threat was made on social media that the school would have been blown up.

The Police Commissioner confirmed receiving the evidence from O’Toole and said it would be analysed. He brushed aside questions about whether the Guyana Police Force has the technical capacity to decipher the recording. “I would not speak about technical capacity,” he said, while noting that the recording might lead to the questioning of more persons by investigators.

O’Toole said he also dispatched a copy of the two-week old recording to the United States (US) Embassy in Georgetown. He said the person, whose voice is featured, is known to thousands of Guyanese but he refused to provide the name to reporters.

The School of The Nations Principal called for “pressure” to be put on the US to help solve the crime including a threat on social media to blow up School of the Nations hours before he was shot. The Australian-Guyanese, who has been living in Guyana for more than 40 years, expressed concern that the US was not treating the incidents seriously in the same way they would have been had they occurred on US soil or at the American School. He said US Ambassador to Guyana, Sarah-Ann Lynch “assures us that the FBI (Federal Bureau of Investigations) investigated the matter”.

“One of my hopes after this is that the American embassy will appreciate the responsibility. I wonder if that threat had been made against the American School here or to an American school anywhere in the world, if they would wait fourteen weeks before the embassy, the FBI would say this is what they have done. There is no doubt that for our part that has been a source of tremendous frustration,” he said.

The Police Commissioner said the Principal of Nations School was shown evidence that someone, who he (O’Toole) had strongly believed shot him in his yard at Prashad Nagar and danced afterwards, and associated with “one of the most perilous and dangerous games”, had actually left Guyana on December 15.

Commissioner James said Guyanese police and US law enforcement agencies were cooperating. He said one person of interest was in the US, and another was in another unnamed country.

“Some investigations are quite painstaking because of the evidence that is being pursued,” James said. Demerara Waves Online News was told that the son of a Guyanese lawyer in Georgetown was questioned by American investigators after the Internet Protocol (IP) address had been traced to a number of Facebook posts.

Previous: OPINION: How asinine and unthinking is this government!
Next: Harmon appointed Director-General of the Ministry of the Presidency