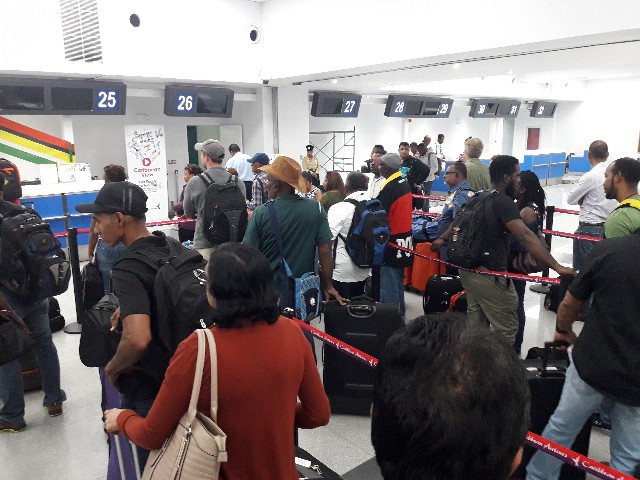 Caribbean Airlines travellers waiting to be checked in at CIJA airport on Friday.

The Cheddi Jagan International Airport (CJIA) on Saturday said it has no legal obligation to the International Air Transport Association (IATA) to provide information about the new airport security fee.

The airport authority further laid the responsibility to end the long passenger delays squarely in the hands of IATA to put in place the pay codes.

“Three months have passed since the notification of the 25th January, 2019. The Airport is firmly of the view that had IATA acted with the alacrity and competence it usually displays, the fee codes could have been fully implemented by the 1st April, 2019. The Airport’s past experiences with IATA corroborate this belief,” the CJIA said in a statement.

Since the introduction of the fees, Caribbean Airlines flights have been delayed by more than 30 minutes because airline representatives at CJIA now have to collect GYD$7,500 from each passenger.

Following is the full text of the CJIA statement.

Mr. Cerda is reported to have said amongst other things that: “It is completely unacceptable that passengers are being inconvenienced in such a manner. This is a direct result of the airport’s management refusal to engage with IATA on a process which is standard practice across the globe. As a consequence, our member airlines have unfortunately no choice other than to manually collect the additional fees and charges.”

Despite not having any legal obligation to engage IATA, the Airport Corporation responded to many queries raised by IATA and even met with its representatives in Canada on the 13th February 2019.

Unfortunately, IATA appears to have made it a pre-condition to facilitating the airlines, that CJIAC provide information to them including the presentation CJIAC made to its Board or line Ministry for the increase of fees so that they could better understand the reason for the fee increase.

No customer airline has requested the information sought by IATA and generally appear to be disinterested in their requests. IATA without any cloak or shroud of legitimacy is demanding that CJIAC make what can only be characterized as an airport fee application filing to them providing full justification and explanation of the basis on which the fees have been determined.

Unfortunately, CJIAC is a public corporation and its officers and employees are prohibited at penalty of law from amongst other things, providing information to entities for the purposes of certifying the basis on which the corporation determined the fees it would charge. Much less in this case where there is no legal relationship between IATA and CJIAC.

This notwithstanding, CJIAC has engaged with IATA as a matter of courtesy on numerous occasions. Indeed, when CJIAC and GRA [Guyana Revenue Authority] disbanded the tax collection booth in the check in area, which incidentally was accompanied by a small fee increase, there was no insistence on justification coming from IATA.

Over the last few years the CJIAC has been meeting with its stakeholders on a weekly basis and collectively discussing and agreeing on all aspects of the modernization works at the airport. The short and medium term plans for the airport including the substantial capital outlay for 2019/2020 were also discussed.

Commencing as early as October 2018, the CJIAC met with the airlines and held discussions on proposed fee increases. The preference indicated by most of the airlines was to have these fees included in the ticket price. CJIAC notes that not all airlines plying the Guyana route are IATA members. For those airlines that are not IATA members, there is no need for IATA to make arrangements regarding the inclusion of the fee in their tickets. The non-IATA (airlines) make their own arrangements that have airport fees collected and paid over to the CJIAC.

Although there may be some inconvenience during transition to the fees this is usually resolved in a relatively short period of time.

On the 25th January 2019, the Airport Corporation wrote the airlines, in keeping with the provisions of the terms and conditions of the Air Carrier Agreements between the Airport and the airlines, informing them of proposed fee increases effective from the 1st April, 2019. The Airport also provided explanations for the fee increases. CJIAC had budgeted $2Bln in Capital Works for 2019/2020 to improve the services offered to the passengers and its airport stakeholders.

The larger terminal with Passenger Boarding Bridges have seen a significant increase in operational cost inclusive of power consumption.

The notification satisfied the agreed terms and conditions set out in the respective Air Carrier Agreements. No objection was raised by any airline.

After issuing the letter of the 25th January, CJIAC received an email from Annaleen Lord of IATA dated 29th January, 2019 in which she represented that their members had complained to them regarding the fee increase and requesting that CJIAC shares the presentation it made to the Board or line Ministry for the increase of fees so that they could better understand the reason.

Thereafter, there were regular exchanges of email correspondence on the 1st, 3rd, 4th, 7th, 8th, 12th and 20th February, 2019 and as stated earlier, CJIAC and IATA representatives met on 13th February, 2019 in Canada.

On the 20th February, 2019 IATA repeated its request that CJIAC shares the presentation it made to the Board or line Ministry for the increase of fees so that they could better understand the reason and recommended that the effective date of the fee increase be postponed to allow a selling date at least three months prior to travel dates.

CJIAC hastens to point out that no ICAO policy document can override the national laws governing CJIAC nor the express provisions of the Air Carrier Agreements between the Airport Corporation and respective airlines. The Air Carrier Agreements expressly provide for the airport to impose fees and for the airline to pay, on demand, or as the same otherwise fall due all applicable fees specified from time to time by the Airport. In the case of Caribbean Airlines, the airport is required by the agreement to give them two months’ notice of any new fee or fee increase.

In response to the CJIAC letter of 25th January 2019, notifying the airlines of the proposed increases, Caribbean Airlines replied more than a month later, by letter dated February, 21st 2019, a soft copy of which was received by CJIAC on the 1st March, 2019, followed by the hard copy delivered on 4th March, 2019.

In that letter of February 21st, Caribbean Airlines made a series of demands of the airport including a demand for A Caribbean Duty Free Lounge, a Club Caribbean Lounge and designated customer service centers, where refreshments can be offered during delayed flights, or early morning or late night services. CAL requested that the fee implementation be delayed to July 1 2019, a date more than five months after the notification of the 25th January, 2019.

This is not the first time that there have been increases in airport fees and charges. On the last occasion in 2017, IATA was able to implement the new fees in as little as 6-8 weeks. Notably, there was no demand from the airport to provide its internal documents.

The letters and correspondence informing the airlines were sufficient for IATA to act on in the case of airport fees, whilst a copy of the legislation was requested in respect of the increased government taxes.

On that occasion too, there was a transition period during which passengers were required to pay fees and taxes at the airport pending IATA completing

The Airport does not know what agenda IATA is adopting, but it is inconsistent with the laws of Guyana, the Air Carrier Agreements and ICAO recommendations in cases where there are valid Air Carrier Agreements. It appears that IATA intends to interfere with the contractual relations between CJIAC and its customer airlines including those which are not IATA members.

Three months have passed since the notification of the 25th January, 2019. The Airport is firmly of the view that had IATA acted with the alacrity and competence it usually displays, the fee codes could have been fully implemented by the 1st April, 2019. The Airport’s past experiences with IATA corroborate this belief.

IATA in seeking to have CJIAC justify the increases to them have sought to exercise a regulatory function it does not have. In so doing IATA has overreached its authority.

It must be noted that the decisions of the Cheddi Jagan International Airport Corporation are guided by the Public Corporations Act, the CJIAC Order, relevant ICAO recommendations, and the Air Carrier Agreements between the Airport and the airlines.

It is clear from the position taken by IATA that they are unaware of laws and agreements by which the airport is bound.

Further, ICAO Policy Document 9082 recommends that airports recover costs associated with the provision of services and maintenance of airport facilities. The Airport Corporation made every effort to have the aircraft operators collect these fees as recommended by ICAO; unfortunately, IATA through its actions, thwarted every effort to make this process work for the benefit of all parties.

The Cheddi Jagan International Airport Corporation remains committed to working with its stakeholders to provide a seamless and gratifying experience for the travelling public and hopes that IATA will also assist in this regard.

As far as CJIAC is aware, Caribbean Airlines is the only IATA member that is presently collecting the new fees from the travelling public. The other airlines seem to have taken a different approach.

CJIAC offers an open apology to (the) travelling public for the inconvenience being caused. It should be temporary. The ball is in IATA’s court.