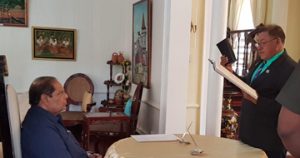 Vice President Sydney Allicock being sworn in to perform the duties of Prime Minister before acting President Moses Nagamootoo.

The constitutionality of Vice President Sydney Allicock’s appointment as acting Prime Minister was Sunday being called into question because he is not an elected member of Parliament.

Former Attorney General, Anil Nandlall reasons that Allicock’s swearing in by acting President Moses Nagamootoo is unconstitutional because according to Article 101 (1) the Prime Minister must be an elected member of the National Assembly. In the case of Vice President Allicock, who is also Minister of Indigenous People’s Affairs, Nandlall said he (Allicock) was appointed a technocratic minister in keeping with Articles 103 (3) and 105.

“A person cannot be appointed to act in an office if he is not qualified to be appointed to that office. Therefore, Sydney Allicock is unlawfully and unconstitutionally acting as Prime Minister,” said Nandlall. He questioned how a Cabinet of five lawyers, including Attorney General Basil Williams, “continues to make these elementary blunders baffles the rational mind”.

Allicock was a candidate for Region 9 (Upper Takatu-Upper Essequibo) in the 2015 General and Regional Elections but he was defeated by the People’s Progressive Party (PPP).

However, Minister of State Joseph Harmon shrugged off the question when it was posed to him, saying that it has nothing to do with Allicock’s inability to vote in the House. “He performs the function of the Office of Prime Minister as being the most senior VP in the country presently… (and this) Has nothing to do with his voting in Parliament… When we have to go to Parliament that issue will be addressed,” Harmon told Demerara Waves Online News.

Prime Minister Moses Nagamootoo is performing the duties of President.

Allicock was absent from the National Assembly during the crucial 33-32 vote on an Opposition PPP-sponsored no-confidence motion on December 21, 2018 when then government MP Charrandass Persaud voted with the opposition that won that vote.