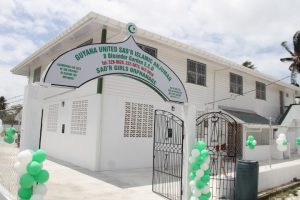 Six months after the Shaheed Girls’ Orphanage rose from the ashes into a spanking new edifice, calls were Sunday made for support to equip the facility with a computer laboratory and Internet, and for caregivers to ensure the orphans’ properties are respected.

After the wooden facility at Oleander Gardens, East Coast Demerara, was destroyed by fire in October 2018, forcing the authorities to house the girls with their male counterparts at the Boys’ Orphanage in Kitty, efforts were quickly made to rebuild the orphanage.

Treasurer and Chief Executive Officer, Raheema Rahaman singled out former Attorney General Anil Nandlall for a major role he played in sourcing wood for the reconstruction of the orphanage after she had failed to get much needed greenheart supplies from several lumber yards. She said the lawyer also ensured that other items were sourced for building the new orphanage which is managed by the Guyana United Sad’r Islamic Anjuman. 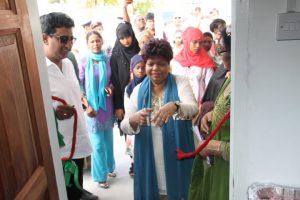 Nandlall, in brief remarks, said the commissioning ceremony was partly aimed at creating greater awareness about the vital role orphanages are playing in the lives of less fortunate boys and girls in preventing them from becoming prostitutes and drug addicts.

He sounded a stirring appeal for public support for the proposed computer laboratory and Internet. “We have to begin to work on that project now. I pledge to begin so I ask you to work with me…,” he said. “I’m enlisting your support from now so that when I call you to donate the computers and the printers, you will have a background knowledge of it and some of you are free to begin to source them because that is the next phase of the project,” he said. 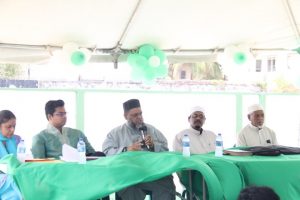 Nandlall thanked Minister Ally, among others, for responding to his request for assistance to rebuild the two-flat building. “There are so many people who generously gave when asked and I’m hoping with some surety that they will continue to assist us in ensuring that these children have a healthy and successful future,” he said.

Minister of Social Protection, Amna Ally also hailed the work of the Muslim community in supporting the housing, health and education of the  boys and girls. Referencing the Holy Qur’an, Ally said guardians should not misuse properties that belong to orphans such as converting them to their own use or mixing them with theirs. “We need to do all we can to ensure that children enjoy their childhood against the background of secure and loving and stable environments. In that way, they can develop (to) their full potential, grow up into responsible adults and become, in their turn, good parents,” she said. 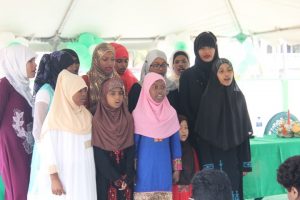 A number of the residents of the orphanage singing.

Maulana Abu Bak’r, who has studied in India, Pakistan and the United Kingdom, emphasised the importance of engaging in noble activities to bring value to someone’s life. “The caretaking of orphans in Islam is a free passport to paradise,” he said. The Muslim Cleric said the reestablishment of the orphanage is a “mark of the nobility of the Guyanese people in keeping with the purposes and goals that are greater than ourselves,” he said.

City Mayor, Pandit Ubraj Narine highlighted the important role that women play in giving power and motivation, “yet we see abuse that takes place towards them”. He urged attendees to always do good to ensure that good always follow them.

Eighteen girls and their caretaker were displaced from the old orphanage on October 20, 2018 in an early morning fire that ravaged that facility.