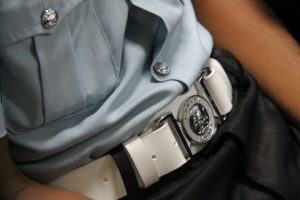 Guyana’s Police Commissioner, Leslie James on Monday told members of the public, who bribe traffic officers, that they too would be penalised because the offence is a two-way street—involving givers and not just takers.

“Once there is no offer, they [sic] can’t be acceptance. It goes both sides—offer and acceptance—and let me warn you civilians, we are coming after you–those of you who are offering,” he said.

Addressing the opening of a training programme at the Officers’ Training Centre, James made it clear that neither bribers nor bribe-receivers would be spared. “You can’t be offering to police and then saying ‘the police tekkin bribe’. It is simple: do not commit offences,” he said.

Contending that those who offer bribes are culpable, he announced that he would be “engaging particular departments of the force” to deal with the scourge. “You just cannot offer and then going and telling people ‘police tekkin bribe’. It is better for you to say ‘civilians (are) offering bribes and police (are) taking bribes,” he said.

He suggested that it was senseless for the public to complain that members of the Guyana Police Force are accepting financial rewards to avoid being charged, while some of the complainants are among those bribing law enforcement agents.

In what is believed to be his frank public address, the Police Commissioner told the law officers that if they think their salaries are too small, they should go home permanently. “If you’re not comfortable with your salaries, leave the job. You came on, you were told what is being offered and you decided to become an agent of the force. How come you have an issue with your remuneration,” said James.

A constable of the Guyana Police Force earns an estimated GYD$79,000 (approximately US$362) per month.

Previous: Manari bypass aims to reduce accidents in Region 9
Next: Do not lock up persons for “behaving bad”- Police Commissioner