The hot sauce lady who did not give up 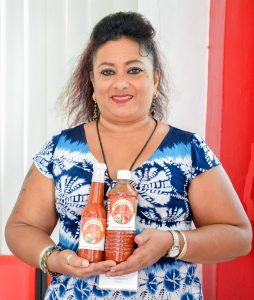 GEORGETOWN, Guyana – March 19, 2019 — Not all problems have solutions, but thankfully some do.

Think of this. You hurriedly prepare a meal and before you turn off the stove, you know it won’t make the grade. A vision of long faces around your dining table pops into your head. You have a problem—a big one.

Then you remember Anne’s Achar, an aromatic and spicy condiment that could save the day.

This solution is only available because of the foresight and dedication of Anne Peters-Bristol, an innovative and resourceful agro-processor who works from her East Coast of Demerara residence. Anne has dedicated lots of time and energy to Guyana’s agro-processing sector with the production of high-quality local condiments, especially achar, hot sauce, mango and passion fruit flavoured chinese sauce and cassareep under her business name, Anne’s Products.

It all began in 2013 when Anne did something perplexing that would have easily begged the question of a hairdresser, cake decorator and florist buying 60 pounds of hot peppers. It was such an impulsive, unusual act that even Anne herself would have been hard-pressed to give a reasonable answer.

The reason Anne bought the peppers was because she had an idea, one as simple as it was revolutionary: Buy a lot of hot peppers; blend them; make a batch of exquisite bottled hot-sauce and turn it into a business.

Admittedly, Anne wasn’t sure how successful her mission would have been. All she had to go on was the encouragement from her relatives and friends who tasted her hot sauce and often encouraged her to bottle and sell it.

Almost immediately, it made her cry—literally. Anne found out the hard way that the fumes from blending a lot of hot peppers were a scorching irritant to her skin and eyes. As her tears flowed, she wondered if she would be able to complete what she had gotten herself into.

Discouraged by her experience with the fumes, Anne tearfully told her husband she would quit. Nevertheless, she poured her blended hot-sauce into a large bottle and left it to cure for a month. After the month had passed, Anne poured the hot-sauce into jars, took them to the market and asked vendors to sell them for her.

To her surprise, all were sold and vendors reported that customers were asking for more. This inspired Anne and her doubts vanished. She promptly bought more hot peppers, blended them on her kitchen counter and started bottling her sauce again.

Her customers couldn’t get enough hot-sauce and she had to make more and more. In the process, she cheerfully overworked five regular blenders until they crashed and burned. This caused her to acquire a heavy-duty blender that is now the mainstay of her operation.

In her first three years in the business of making condiments, industrious Anne expanded her range of products to include three varieties of spicy achar—tamarind, mango and bilimbi (‘sourie’). She also added the popular spicy ‘lime chunks n pepper’ which now graces the shelves of many satisfied customers’ refrigerators.

Describing her signature hot sauce, Anne said that pepper, garlic, bilimbi (‘sourie’), salt and other seasonings are all combined and cured to create a spicy fusion in a vinegar solution.

Looking back, Anne recalled many rejections when she tried to get her products on supermarket shelves. “There were lots of hiccups. They would tell you they are not buying local or that they have a lot of products already. But I never gave up. I always went back and I finally got into all the supermarkets I went to,” she said.

She recalled when she approached the Guyana Shop as a retail outlet for her products and, for the first time, she heard about stringent food safety and packaging requirements. She was told that her products had to be analysed and approved by Guyana’s Food and Drug Department, along with other licensing requirements. She was also advised to discard the black-and-white labels she was using at the time, and get professional, machine-readable labels with bar-codes.

“It took me a while to get all these requirements. Then I went back to [the manager] and told him I had gotten everything,” she said. The Guyana Shop subsequently accepted her products and started to retail them to customers.

Anne now has three assistants who help her prepare her products, and she visits supermarkets weekly with new supplies made from fresh local ingredients. She also takes her products to various villages across Guyana to sell them directly and get instant feedback from customers.

“My job is very hectic… I procure, I market, I merchandise, I distribute…” she said. It’s a heavy workload because she still has a hands-on approach to production. She does the bulk of the preparatory work herself while still preparing family meals and doing household chores.

However, Anne loves what she does. She is now immune to the fumes from blending peppers, and her biggest challenge is sourcing bottles and jars. She is rightfully pleased with the extent to which her business has grown from the time she started, but she wants it to expand and enhance her products.

In the short term, Anne hopes to take full advantage of the exposure her products will get through her participation in the Guyana Manufacturing and Services Association’s Marketplace UncappeD event that will be held on March 31, 2019 at the Guyana National Stadium at Providence, East Bank Demerara.

Anne is keenly aware of the success small entrepreneurs have achieved by showcasing their products at GMSA Marketplace UncappeD events, which provide tremendous opportunities for these entrepreneurs to gain exposure and highlight exceptional locally-made products.

Anne Peters-Bristol has certainly come a long way, and she still has a long way to go. “It was a challenge for me. I would tell women to live their dreams. Don’t be discouraged; believe in yourself. It’s great to earn your own money, have your own business and be your own boss,” she advised.

Look for Anne at the GMSA’s Marketplace UncappeD at monthend and prepare to be enchanted and delighted by her superb range of products, which exemplify the heights Guyanese entrepreneurs can reach when they resolve to achieve their dreams—no matter what.