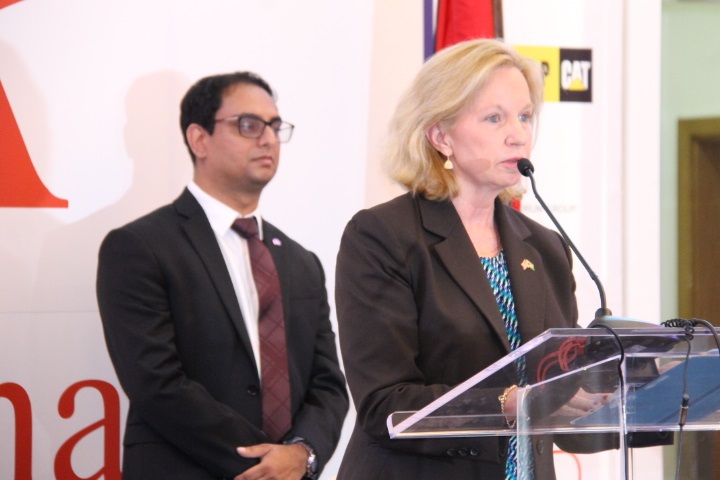 “Together with sound, democratic governance and an independent and active civil society, the private sector here has the opportunity to thrive and Guyana has the opportunity to become one of the wealthiest countries in the hemisphere,” she said addressing a reception hosted by the American Chamber of Commerce-Guyana (AMCHAM-G). Among those present was acting President Carl Greenidge.

The US Ambassador noted that as Acting Assistant Administrator for Latin America and the Caribbean at the United States Agency for International Development (USAID), she had implemented strategies to help promote democratic processes, generate economic prosperity, reduce crime and violence, support civil society, defend universal rights and protect the environment in the Western Hemisphere. “I am, therefore, no stranger to the unique factors impacting economies in this region and look forward to delving into the specifics of the Guyanese landscape, including its investment climate,” she said.

AMCHAM Chairman Zulfikar Ally said economic growth, security, good governance and transparency are national priorities and key to a sustainable, strong economic partnership between Guyana and the US. “Our organisation recognises that the presence of these conditions boost investor confidence and considers them of paramount importance and will support all efforts to promote their presence and advocate that the rule of law and good governance is always maintained so that the success of both American and Guyanese companies are dependent on factors within their own control and can be guaranteed a stable environment in which to operate,” he said. 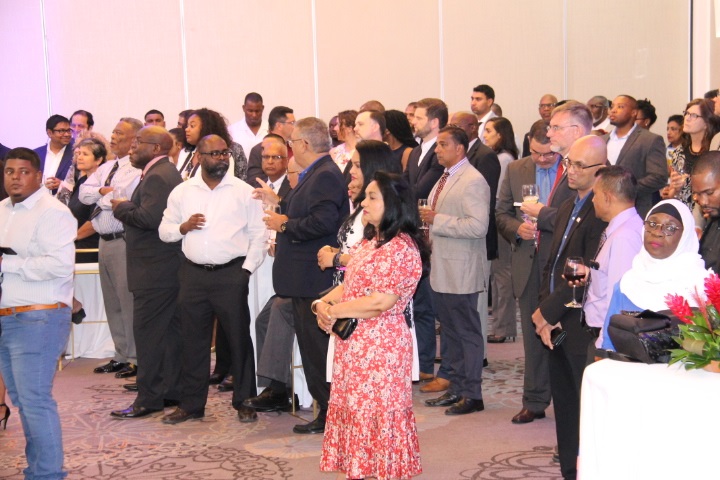 A section of the attendees at the AMCHAM-G reception.

Their comments come at a time when a delegation from the Carter Center is meeting several political and civil society stakeholders concerning the political stalemate in Guyana as the 90-day timeframe within which general elections is constitutionally due expires on Thursday.

The Court of Appeal is yet to hand down a decision in one of the appeals for which arguments have been concluded. The Carter Centre delegation has already met with Attorney General Basil Williams and the Private Sector Commission. A similar meeting is expected to be held Wednesday with the Guyana Elections Commission.

The American envoy told the reception that Guyana’s economy is much more than the 5.5 billion barrels of oil as the country has registered positive economic growth for the past 10 years. “Beyond oil, Guyana can also leverage and develop its other industries to include tourism, manufacturing, agriculture, non-oil extractive industries and other services. And there is a bright future here for renewable energy, too. It is apparent that Guyana is working hard to seize the moment,” Lynch added. 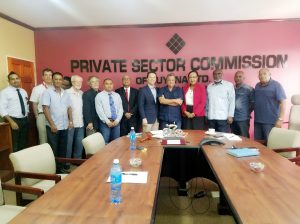 The Carter Center delegation meeting with the Private Sector Commission.

AMCHAMs serve as important links between private sectors and their governments. AMCHAM-G was founded in August 2018 and is an associate of AMCHAM of Latin America and the Caribbean (AACCLA) created to promote trade and investment between the United States and the region. The organisation’s ally membership now stands at more than 45, with seven committees.

“We expect that through membership of the AACCLA and our strong collaboration with the US Chamber of Commerce in Washington DC, AMCHAM-Guyana would be in a position to tap into the global network of AMCHAM members and learn from their past experiences in overcoming challenges to those faced by the private sector in Guyana and to leverage this relationship for the benefit of our members and Guyana,” he said.