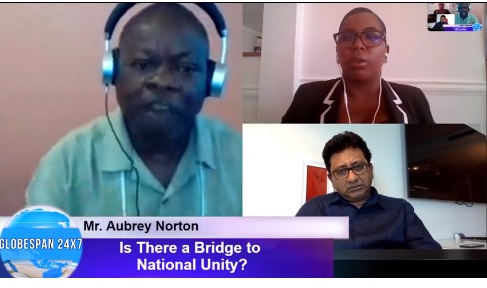 Executive members of Guyana’s two major political parties at the weekend differ on the route that should be taken to achieve national unity, with the People’s National Congress Reform’s (PNCR) Aubrey Norton citing Opposition Leader Bharrat Jagdeo as the major stumbling block.

But, People’s Progressive Party (PPP) executive member, Anil Nandlall countered, saying that principle instead of personality should be the major pillar for national unity.

Norton and Nandlall appeared on this week’s Globespan 24×7 discussion on the topic “Is There A Bridge to National Unity?”

While throughout the more than one-hour long programme the two politicians traded salvoes about their performances in government, Norton accused the PPP of using the December 21, 2018 no-confidence motion as a means of getting power through the backdoor.

He said Opposition Leader Bharrat Jagdeo’s main aim was to gain political power, protect himself and his ministers from legal action and cash in on expected oil wealth.

Norton, a former University of Guyana Political Science lecturer, stated several times that there are people in the PPP with whom the PNC could work to achieve “some form” of national unity except for Jagdeo, whom he accuses, of using the constitution and the law when it is convenient for him.

“If we are going to talk about building bridges, I believe there are people in the PPP you can relate to and build bridges but I do not believe the Guyanese people will accept Bharrat Jagdeo as the person to initiate that,” said Norton, a former PNCR General Secretary and one of the most seasoned politicians on his party’s executive.

He further contended that the PPP’s presidential candidate, Irfaan Ali would be Jagdeo’s pawn, a charge that Jagdeo has already dismissed.

For his part, Jagdeo has already dismissed the idea of the PPP entering into political negotiations with Prime Minister Moses Nagamootoo at the helm of the government’s delegation, fearing that he could not make binding decisions.

Norton added that no one would want to be part of a national front or national unity government if the key player has no interest in abiding by Guyana’s constitution and has had a history of at least 35 scams while the PPP had been in office. “Any attempt at national unity must be based on good governance and while I believe there is scope for some form of national unity, I don’t believe that what was manifest while he was president suggests that is his interest, is in national unity,” Norton said.

Acknowledging the importance of national unity as a fundamental ingredient for Guyana’s future prosperity dating back to 1966 at the time of independence, Nandlall said the PPP has a “long track record” of seeking to bridge the gap between Afro- and Indo-Guyanese dating back to the formation of that party.

Nandlall said national unity requires people who are prepared to accept democratic principles that govern all democracies instead of greeting electoral defeats with burning, looting and beating of opponents on the streets. He repeatedly accused the PNC of doing so after it lost the general elections in 1992, 1997 and 2001.

Norton did not react to any of those claims.

PNCR executive member Norton said the PPP has had a history of breaching bipartisan political agreements.

He cited the need for mechanisms to ensure that not only Afro- and Indo-Guyanese are comfortable with each other, but also the inclusion of Amerindians. He recommended that the constitution be amended to include a weighted majority of more than 51 percent for approval of the National Budget “to compel the ethnic groups and parties to talk with each other”. “The constitution can help, but it’s also a political process. We have to make changes to the political power structure and the need for counter-balances,” he said.

The PPP is largely supported by Indo-Guyanese while Guyanese of African descent back the PNCR-dominated governing coalition of A Partnership for National Unity and the Alliance For Change (APNU+AFC).

Previous: WPA Chairwoman prefers to stay in coalition
Next: Three dead on Guyana’s roads within 24 hours