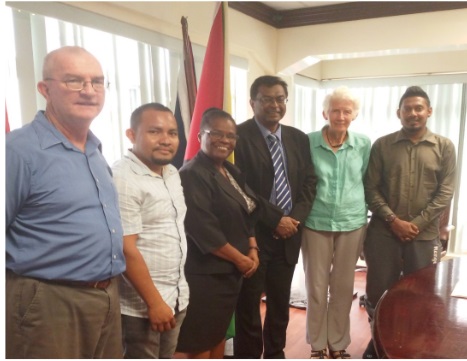 Deaf persons will be licensed to drive private vehicles, but a date has not yet been set for commencing piloting a programme for sitting  theoretical and practical drivers’ examinations, the Ministry of Public Security said Monday.

Minister Khemraj Ramjattan said the pilot project, which would be confined to the Guyana Police Force’s ‘A’ Division, was in keeping with a Cabinet decision to amend the Motor Vehicle and Road Traffic Act on May 24, 2018 to issue drivers’ licences to deaf persons.

The ministry added that drivers’ licences would be issued to deaf drivers only for private and not commercial vehicles, given the present infrastructural development and culture of driving on Guyana’s roadways.

“Six persons from the Deaf Community in Guyana will now be included in the pilot project at a date to be announced later,” the ministry said.

Agreement was reached on February 28 when representatives of the National Commission on Disability and the Deaf Association of Guyana met with Ramjattan. The deaf community had in recent weeks been upping public pressure on authorities to grant them drivers’ licences.

In addition to the pilot project, the stakeholders agreed to the need for a rigorous national awareness campaign for the general populace including the beneficiaries.

Guyana is a signatory to the United Nations Convention on the Rights of Persons with Disabilities and the government says it will continue to provide equality of opportunity and ensure non-discrimination for persons with disabilities.