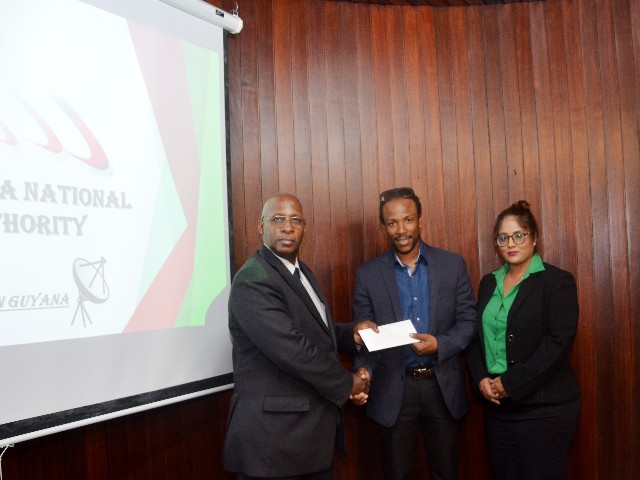 The Chairman of the Guyana National Broadcasting Authority, Leslie Sobers (left) presents the approval letter to Region 10 parliamentary representative, Jermaine Figueira. Also in picture is Legal Advisor and Assistant to the Minister of State, Geeta Chandan-Edmond.

Linden on Friday moved one step closer to getting its own television station licence, after waiting more than seven years.

The Guyana National Broadcasting Authority (GNBA) made good on last week’s public announcement by Minister of State, Joseph Harmon that Region 10 would be getting approval for its television station this week.

Chairman of the GNBA’s Board, Leslie Sobers issued a letter of approval for Linden Broadcasting Network to receive a television licence in the Secondary Zone, “having satisfied all the necessary requirements” of that regulatory body.

The GNBA said the approval letter was received by Chairman of the Linden Broadcasting Network, Mr. Rennis Morian. Also present at the ceremony was Legal Advisor and Assistant to the Minister of State, Mrs. Geeta Chandan-Edmond.

“The Authority hereby extends congratulations to the Linden Broadcasting Network, and expresses optimism that this broadcasting entity will assist in the further development of broadcasting in Guyana, particularly in the mining town of Linden,” the GNBA said.

This development appears to mark the end of waiting that dates back to 2011 when Linden Broadcasting Network was among those that had not received licences that had been unilaterally issued by then President Bharrat Jagdeo under the Postal and Telegraph Act.

The Broadcasting Act had not been in force at the time.

In the aftermath of the 2012 violent protests in Linden that had resulted in the death of several persons and burning of many government buildings, a peace pact had provided for, among other things, the granting of a TV licence to Linden.

However, little progress had been made partly due to positions that had been taken by the directors of the Linden Broadcasting Network.

The Linden unrest had been sparked off by the then administration’s decision to remove a decades-long electricity subsidy, a move that would have resulted in a hike in electricity rates.