No commitment that RUSAL bauxite workers would be reinstated 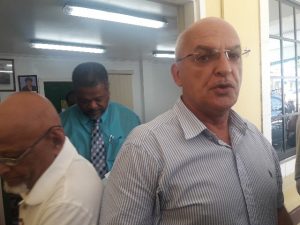 Top officials of United Company Russian Aluminium (UC RUSAL) and government’s Labour Department on Tuesday gave no clear indication on whether 60 workers, who were fired on Monday, would be reinstated.

A number of angry persons blocked a road which leads to the mines at Kwakwani.

Chief Labour Officer, Charles Ogle did not address claims by RUSAL’s Representative, Vladimir Permyakov that the workers at Bauxite Company of Guyana Inc. (BCGI) signed a contract stating their services would be terminated if they down tools. “Strike is the worst form. It’s a conflict,” Permyakov said, adding that the strike by 60 persons was a breach of the technological chain which could have serious consequence for occupational safety and health.

Ogle said he has not seen the contract between the workers and RUSAL’s management. The Labour Department said two representatives from RUSAL’s headquarters were due in Guyana this week for talks with the Labour Department which has “put forward two proposals”. He declined to divulge the details.

The Chief Labour Officer and Permyakov said the Ministers of Labour, Amna Ally and Keith Scott were due to visit the mines site and meet with workers.

Workers and other persons blocking a road at Kwakwani that leads to RUSAL’s mining operations.

Permyakov believed that the workers’ decision to strike last week to protest a one percent salary increase for 2019 was instigated by someone else. He said 60 workers were fired on Monday after several appeals for them to return to work and forget the grievance that stemmed from the pay dispute. “Never say never again. We shall see… We were open (to having them reinstated) on Friday, on Saturday, on Sunday. We spoke many times… They were asked a few times, many times: ‘guys, stop it. We shall forget that you didn’t work those hours. Forget it’ and the company still had to pay other workers who had to stop performance because teams must be complete,” he said.

He noted that 10 years ago, 57 workers were fired because they went on strike and for that “no excuses, no regrets”.

Asked what will happen if the dismissed workers do not remove from the mines site, he said there was no place in the dormitories and canteen for the new shifts that are expected to assume duty on their shift.

The RUSAL official described the “illegal action” by the workers at the mines site as “very unfortunate”. On the issue of the one percent salary increase, he explained from 2013 to 2019 workers have earned a 15 percent increase based on approval of the indexation by RUSAL’s headquarters.

Permyakov said the workers get several fringe benefits such as free electricity, 50 percent cheaper cooking gas, income tax, social security, health insurance and pensions although the company has not been making a profit for the past 14 years in Guyana. “Our company is financially audited every year. We are open and transparent. You can see we are not profitable,” he said. 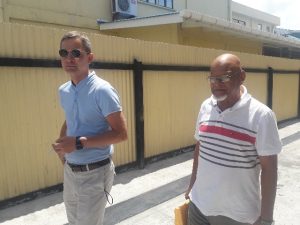 With mining at a standstill and only kiln drying of ore being done, the industrial unrest escalated over the last few days leading to the dismissal of 61 Guyanese workers. Union representatives said they have refused eviction orders by the company and were holding their ground until their demands were met satisfactorily.

The Guyana Bauxite and General Workers Union (GB&GWU), which is the recognised bargaining agent, said grievances include a measly one percent salary increase for 2019, poor occupational safety and health, unilateral cut in vacation allowances and non-payment for work on holidays.

However, Permyakov said RUSAL has no relationship with the union, saying that the poll conducted on October 3, 2017 was done by a null and void Trade Union Recognition and Certification Board.

But, the Chief Labour Officer said his department would hold a joint meeting with officials of the union and management. “We are still engaging because the union is left out. The union has to be part of this process,” he said.

According to the company’s website, RUSAL  is a leading, global producer of aluminium. In 2017 it accounted for approximately 5.8% of global production of aluminium and 6.3% of alumina. UC RUSAL employs 62,000 persons in 20 countries, across 5 continents.