The Russian Aluminium (RUSAL)-controlled Bauxite Company of Guyana Inc. (BCGI) on Monday fired 61 workers, and company representatives refused to attend a meeting summoned by the Ministry of Labour, officials said.

Chief Labour Officer, Charles Ogle and General Secretary of the Guyana Bauxite and General Workers Union (GB&GWU), Lincoln Lewis said they were informed of the dismissal of the workers and the RUSAL officials’ refusal to attend the meeting.

Individual letters were not given to each employee and no reason was given for the company’s decision to sack the workers. “This notice is to advise that the under mentioned persons have been terminated from the company’s employment effective the 18th of February, 2019,” said BCGI Personnel Manager, Mikhail Krupnenin.

Lewis called on President David Granger to intervene on behalf of government which has a 20 percent stake in BCGI, saying the company has been violating fundamental labour and human rights since 2009. “It becomes now a political issue. This is a company that the government of Guyana, the people of Guyana, own 20 percent of it. They are transgressing the rights of workers while they are in violation of the law in the name of the Guyanese people. And it is said out there that government is part and parcel of these transgressions,” said the veteran trade unionist who is also General Secretary of the Guyana Trades Union Congress (GTUC). “This is time for political action. This is time for the President to call the head of RUSAL and put them to sit down,” he added.

Told that RUSAL-BCGI has been refusing to participate in talks with the union because he allegedly had made a racial slur against the company’s official several years ago, the GB&GWU official remained unapologetic on the grounds that Guyanese workers must not be enslaved, were not allowed a return of slavery and indentureship and they are different to Guyanese in physical feature, culture and life experiences. “Why should I apologise for the truth? I don’t have a problem with it,” he said. 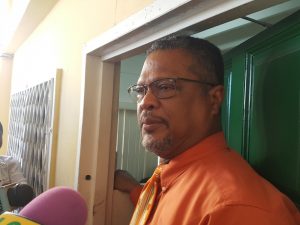 The Chief Labour Officer said RUSAL-BCGI officials would be compelled to attend a conciliation meeting on Tuesday in the absence of the union. “They have to come here. There are no ‘ifs and buts’,” Ogle said, adding that the workers have “a justifiable claim”. Ogle said the Labour Department would be meeting company representatives “one-on-one” and would be confirming the dismissal of the workers. “A dismissal is serious. We must treat with those things. All the issues that the union would have submitted are serious cause for concern,” he said.

Ogle said he decided to go ahead with meeting the union in the absence of the RUSAL officials. “You have to listen to the parties. We didn’t get anything to know what’s happening there so we had to listen to the union,” he said.

While Lewis railed against the company for refusing to attend Monday’s meeting at the Ministry of Labour’s invitation, he defended his decision to participate in the talks in the absence of RUSAL-BCGI officials. “I don’t have to be at the same place at the same time in the same buildings with the employee dealing with the same issue. The conciliator listens to the union. We articulate our position and he takes it to them and he talks with them. He listens them and he comes back to us,” the GB&GWU official said.

The company last week shut down two sections of its mining operations at Aroaima after workers downed tools to protest a one percent increase in salaries.

Two days later, the workers reportedly resisted efforts by the company to evict them from their houses at Maple Town nearby Aroaima.

Lewis said the pay dispute and related strike was now at the top of the pile of grievances including no payment for holidays, reduced leave passage and poor occupational safety and health. “You can’t change somebody’s condition of employment arbitrarily. It has to be agreed on,” he said.

One of the union representatives barged out of the meeting at the Labour Department, saying “we are not getting results, we are not getting any satisfaction” and said the only option was “we would do what we have to do” without specifying what action was planned. “The Russians were invited. They are calling the shots. They are saying who they want to be present when they are coming here. That is nonsense! You are in my country and you are still saying who must be at the meeting,” union branch secretary, Leslie Junor told reporters. He said the company officials are holding an old grievance against Mr. Lewis.

Junior Minister of Labour, Keith Scott refused to speak with the media and when told that he has been inaccessible, he remarked, “I’m well aware of that”.

GB&GWU won a union recognition poll in 2017 but the RUSAL-BCGI management has been reportedly handpicking employees who they prefer to interface between the workers and the company.