RUSAL chases workers off mine site, shuts down sections 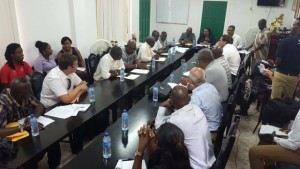 FLASHBACK: Delegations of Bauxite Company of Guyana Inc./Russian Aluminium and the Guyana Government locked in talks on worker’ grievances.

A number of workers at the Russian Aluminium (RUSAL)-controlled operations of Bauxite Company of Guyana Inc. have been ordered off the mine site and a section of the operations shut down, in the wake of a strike for increased salaries, according to a document sent to aggrieved workers.

She indicated that the operations have been closed indefinitely and the workers ordered to leave immediately. “As such all workers attached to the Mining Department Mobile Equipment Maintenance are hereby advised that the work of the Mining Department / Mobile Equipment Maintenance has been brought to a stop until further notice. All affected workers are asked to leave the premises of the company with immediate effect.”

President of the Guyana Bauxite and General Workers Union (GB&GWU), Leslie Gonsalves could not say how many workers were off the job or downed tools because the company has been refusing to communicate with the union although it is the recognised bargaining agent.

The workers went on strike to protest a 1 percent salary hike. Gonsalves said the workers are entitled to no less than 15 percent.

While the GB&GWU said it has informed the Chief Labour Officer, Charles Ogle, efforts to contact him proved futile. Junior Minister of Labour, Keith Scott also did not respond to calls.

The union has accused both the former ruling People’s Progressive Party/Civic administration and the current David Granger-led administration of turning a blind eye to RUSAL’s alleged violation of workers’ rights with impunity.

About a decade ago, more than 50 workers were fired by the company after they had staged industrial action at the mines site but so far they have not been reinstated.