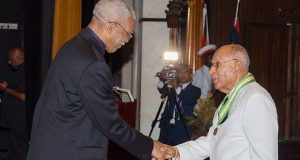 President David Granger says he is “saddened” at the passing of prominent businessman, Mr. Inderjeet Beharry, popularly known as Indi Beharry, who died earlier today at the age of 78.

Mr. Beharry is the son of Guyanese business magnate, the late Mr. Edward Beharry of the Edward B. Beharry Group of Companies.

In 2016, President Granger conferred Mr. Beharry with the insignia of the Cacique’s Crown of Honour (C.C.H.), the country’s third highest National Award.

President Granger expresses sympathy to his wife, Mrs. Shazeeda Beharry, his children Suresh, Anil and Praharshanie and his other relatives, colleagues and friends.