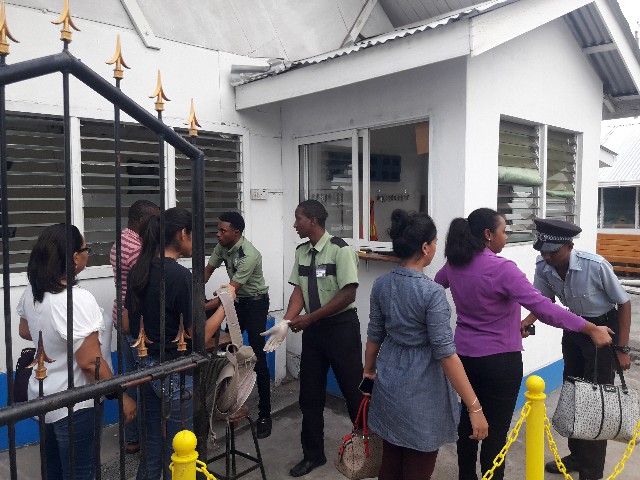 Security guards and police check parents entering the School of the Nations compound for a meeting Friday afternoon.

Despite strenuous efforts by the School of the Nations to tighten security measures in the face of ongoing violent threats, the parents and school’s administration Friday afternoon called on the Guyana Police Force (GPF) to face them and provide satisfactory information about the probe.

Head of the Criminal Investigations Department, Deputy Commissioner Lyndon Alves told Demerara Waves Online News that “I am not aware of an invitation by the administration or parents of School of the Nations for a meeting today. About 20:30 myself and a deputy had an engagement with two representatives from School of the Nations where they were informed that the police is actively pursuing this matter and assured them that the GPF [Guyana Police Force] is committed to ensuring the safety and security of all students, teachers, administrators and parents not only of School of the Nations but all public and private schools across Guyana,” Alves said.

Almost one week after the first wave of threats was issued and the Principal, Dr. Brian O’Toole, was shot and injured, the school is about to reopen its doors from next Monday.

Evidently, security was beefed up at the school Friday afternoon. As parents entered the compound for the meeting policemen and private security guards checked everyone’s bag and scanned them for metal objects.

After security officials of Professional Guard Services (PGS) detailed the numerous security measures, including training teachers, that were being put in place, many parents remained dissatisfied and questioned any armed response to someone who barges past unarmed guards at the sentry. The PGS representative, who said he was trained overseas in school security, said the guards would be carrying hidden batons instead of guns. He estimated the response time to an armed attack at the school at about 10 minutes.

During the interactive session at the latest in a series of meetings between the school’s administration and parents, concerns were raised by Principal of the Upper Forms Orin Ross and a number of parents that the Guyana Police Force was less than forthcoming with the progress of the probe. He added that the police declined an invitation to go to the school and interact with those concerned.

“I just want to say this. This may add more fuel to the fire. I want to let you know that we attempted to get someone from the police to come here this evening to give us an update so I spoke to the lead investigator, then I spoke to the Crime Chief… I’m just going to tell you what the Crime Chief told me. He said to me that there is very sensitive information that they are dealing with in the investigations because they have solicited the help of overseas law enforcement agencies and at this point in time they wouldn’t want certain information to get out there to the public and hence that’s why they didn’t come this evening,” Ross said.

He said when Deputy Police Commissioner Alves was told the school would have reopened on Monday last, “he didn’t advise against it”. At the same time, Ross announced that police would visit the New Market Street-based school on Sunday morning “to do a complete sweep of the compound and buildings” and advise the institution’s private security service provider what they should do.

Ross told the parents, in response to a question on what the police have informed the school administration about the investigation, that “they haven’t shared anything”.

Reacting, a parent lamented “that is unacceptable. We don’t know what we are bringing our children to”.

Ross concurred with the concerned parents that “we perhaps need to demand answers” to which he received immediate support from the floor: “We will support you in getting the answers and it has to be a concerted effort”.

Another  parent recommended that the GPF’s Public Relations Department dispatch bulletins, advising schools what to do in situations like this. The parent fretted that the police force appeared to be taking a laid back approach compared to when President David Granger’s life had been allegedly under threat.

“When the threat was made against the President, within a week that was fixed. They have to know it’s their problem,”  the parent said. 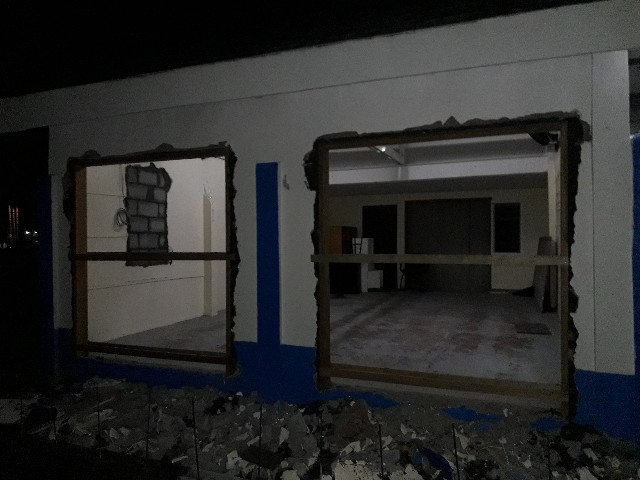 A security area under construction at School of the Nations.

Brian Mc Turk of Professional Guard Services, however, cautioned that police could not share everything.

A group of teachers was expected to remain after the meeting to chart an approach to the GPF.

Meanwhile, students, parents and teachers at Queen’s College and Bishop’s High School were Friday jittery after threats against the school surfaced on Instagram and WhatsApp.

The Guyana Police Force in a late Friday night statement sought to assure all concerned that security was being stepped up at all schools. The force said the investigation is very much active and “several persons were questioned and statements taken.”

“Further, in light of today’s Facebook posts against Queen’s College and Bishop’s High , those matters are also being investigated by the Guyana Police Force which wishes to assure members of the public that it is committed to ensuring safety and security of all students, teachers, administrators and parents of the aforementioned schools and all other private and government schools,” the force said.

At School of the Nations parents were told by the PGS representatives that gun-bearing guards would not be deployed at the school because that could adversely impact students. Other measures include the scanning of students for metal objects, searching their bags, booking all licenced firearms (preferably they should be left safely in vehicles), and training of teachers and parents to respond to someone who attacks the school with a gun.

The official said intercoms were being installed in every classroom to allow for quick communication in case of an emergency.

The school’s administration also announced that the Ministry of Education would next Monday and Wednesday deploy a mobile facility of counsellors and school welfare officers to interact with students and offer their services if necessary.