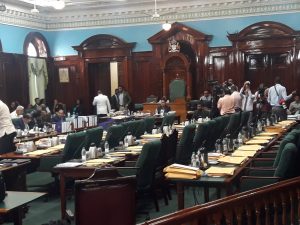 The opposition-boycotted sitting of the National Assembly on Thursday

House Speaker Dr. Barton Scotland on Thursday ruled that the controversy over the validity of the recently passed no-confidence motion should be settled by the court.

While stating more than once in a statement to the sitting, which was boycotted by the opposition People’s Progressive Party, that the no-confidence motion was voted by 33 to 32, he said the issues that have arisen should benefit from a “full, final and complete settlement by a court of competent jurisdiction”.

The House Speaker highlighted the key issues as to whether the majority vote should have been 33 or 34, the validity of the vote, due to the fact that then government parliamentarian Charrandas Persaud is a foreign citizen and whether he could have abandoned the list of candidates.

Dr. Scotland said he usually does not prefer a third party to settle issues in the House. The Speaker added that he had hoped that the government and opposition would have by now met and discussed the implications of the no-confidence vote on December 21, 2018.

Persaud, who had since been recalled and replaced, had sided with the PPP to give it a vote of 33 to 32.

In passing laws, other types of motions and budgets, the government usually uses its simple majority of 33 votes.

President David Granger, who returned last weekend from another round of chemotherapy treatment in Cuba, has stated that he would soon be meeting with Opposition Leader Bharrat Jagdeo to discuss “political cooperation”.