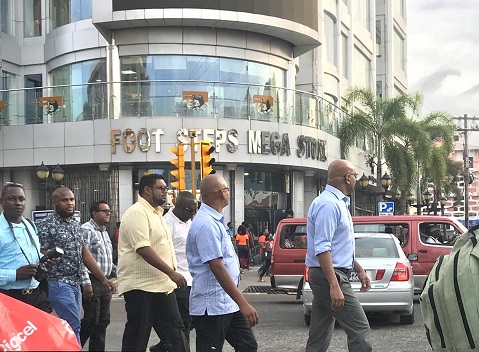 Opposition Leader, Bharrat Jagdeo on a Christmas Eve 2018 walkabout in Georgetown. He was accompanied by Irfan Ali (third from right), widely believed to be Jagdeo’s favourite for the PPP’s presidential candidacy.

General Secretary of the People’s Progressive Party (PPP), Bharrat Jagdeo says he would be a member of the government if his party wins the next general elections, and if the President does not carry out an agreed programme for the benefit of all Guyanese, he would publicly criticise him.

“The choice is you can’t kill the president or do anything of that sort but I can be the first one if I see a departure from publicly criticising, using that too, that it’s a departure from what we have,” he told  reporters on Monday.

Jagdeo made the comment against the background of the PPP’s Executive Committee this Thursday beginning the process to choose its presidential candidate for general elections that are now constitutionally due by March 21, as a result of government losing a Jagdeo-sponsored no-confidence motion.

“The engagement that I will have in the government is to ensure that we deliver promises. As the General Secretary of the party, the party that is now fighting to get people to support it because of its policies, I have to ensure that that happens,’ he said.

He stressed that the presidential candidate/ president has to commit to the PPP’s programme.

He said all of the candidates would have to give a commitment to follow the party’s programme or manifesto. Jagdeo, who was President from 1999 to 2011, said, “I would be part of the government. I made it clear”.

Jagdeo, who became Junior Finance Minister when he was 29 years old and President of Guyana when he was 35, signaled that he preferred someone with Cabinet experience to become the presidential candidate. If that turns out to be true, it effectively rules of Attorney-at-Law, Charles Ramson Jr, who is the only person who has signaled his interest in being the presidential candidate.

“If you have newbies, then it’s much harder if you don’t have some Cabinet experience. I benefitted enormously by being a member of the Cabinet for a while so I had experience as to what the issues were being debated so we have a great pool of people who have had this experience and are still young,” he said. He noted that the PPP has several persons in their 30s, 40s and 50s who have accumulated eight to 10 years cabinet experience.

Ali, currently the PPP’s Shadow Finance Minister, is said to be Jagdeo’s choice for the presidential candidacy.

Jagdeo, who became Finance Minister after Senior Finance Minister, Asgar Ally resigned over internal differences and his own political ambitions. Ally has in recent years rekindled relations with the PPP and mended fences with Jagdeo.