Pres. Granger due back Tuesday 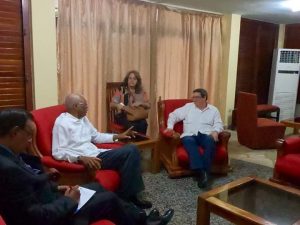 President David Granger will be returning Tuesday to Guyana, having completed the second round of medical treatment and evaluation at the Centro de Investigaciones Médicas Quirúrgicas (CIMEQ) in Havana, the Guyana Embassy in Cuba said.

He will be returning amid a controversial claim by the opposition  People’s Progressive Party that Prime Minister Moses Nagamootoo is violating Guyana’s constitution by remaining in the House while performing presidential duties in Granger’s absence.

Yesterday, the Cuban Team of Specialists reiterated their complete satisfaction with the President’s response to medical treatment and explained that they will continue to monitor the President’s progress in the coming weeks, the embassy added.

Yesterday, also, President Granger received a courtesy call from Mr. Bruno Rodriguez Parrilla, the Minister of Foreign Affairs of the Republic of Cuba.

President Granger took the opportunity again to express his gratitude to the Cuban Government and the Team of Specialists for the treatment that he is being afforded in Havana.

He told Foreign Minister Rodriguez Parrilla that he was very satisfied with the high level of care and attention that he is receiving at CIMEQ and praised the professionalism and expertise of his medical specialists.

The Cuban Foreign Minister remarked to President Granger that he had brought greetings and wishes for his speedy recovery from His Excellency, Miguel -Diaz Canel Bermudez, President and Head of State of Cuba and Army General Raul Castro Ruz, First Secretary of the Communist Party of Cuba. He pointed out that the medical treatment of President Granger at CIMEQ was the fraternal duty of the Government of Cuba and that Cuba will do everything in its power for his full recovery so that he could resume his official duties as quickly as is practicable on a full time basis.

During the course of the meeting, Foreign Minister Rodriguez Parrilla expressed complete satisfaction with relations between Cuba and Guyana and viewed President Granger’s acceptance of the Official invitation from President Miguel-Diaz Canel Bermudez to pay a State Visit to Cuba next year as further evidence of the close relations between the two countries.

President Granger is appreciative of the concern that has been demonstrated for his well being and would like to sincerely thank again, all those individuals and organizations in and out of Guyana that have continued to send their best wishes for his speedy recovery.

Granger was diagnosed with non-Hodgkin Lymphoma, a type of cancer. He has to undergo a total of five rounds of chemotherapy.

2018-12-11
Denis Chabrol
Previous: ExxonMobil donates US$40,000 worth equipment to University of Guyana
Next: Children discover parents’ bloodied bodies in bedroom