President Granger returns to Cuba next week for more treatment 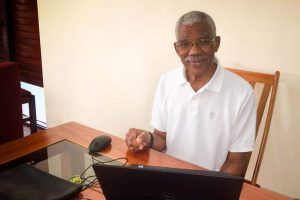 President David Granger is scheduled to return to Cuba next Tuesday for continued treatment for non-Hodgkins Lymphoma, a type of cancer, Minister of State Joseph Harmon announced Friday.

Having concluded the first round of chemotherapy in Cuba,he is due to return to the Spanish-speaking nation.

According to Minister Harmon, President Granger heeded advice by his Cuban medical specialists to scale back public engagements, but “remains in command and control of the business of the state. The president is having meetings. He is giving directions. He is much better than when he left for Cuba. The treatment regime will require him going to Cuba on a number of occasions.”

This was announced by Minister of State, Joseph Harmon at today’s post-Cabinet press briefing. The Head of State’s return to Cuba follows his close to three-week visit for medical tests and subsequent treatment following the diagnosis of Non-Hodgkin Lymphoma.

According to Minister Harmon, the Head of State has conveyed his appreciation, to all who have expressed concern about his illness and wished him a full recovery.

The minister reiterated that the government, “continues to work assiduously to ensure that his visions are kept. The Green State Development Strategy, which is a brainchild of his that we continue to push… Our concern for climate change, our concern for the security of our borders, our concern for the safety and happiness of our people are all principal concerns of our President and he continues to send notes and memoranda in that regard.”
The President’s decision to reduce his workload, his office earlier revealed, was “consistent with advice from his team of specialist doctors at the Centro de Investigaciones Medico Quirugicas (CIMEQ) in Havana, Cuba”.

President David Granger, along with First Lady Sandra Granger, returned to Guyana from Cuba on November 20, 2018, after spending about three weeks there.