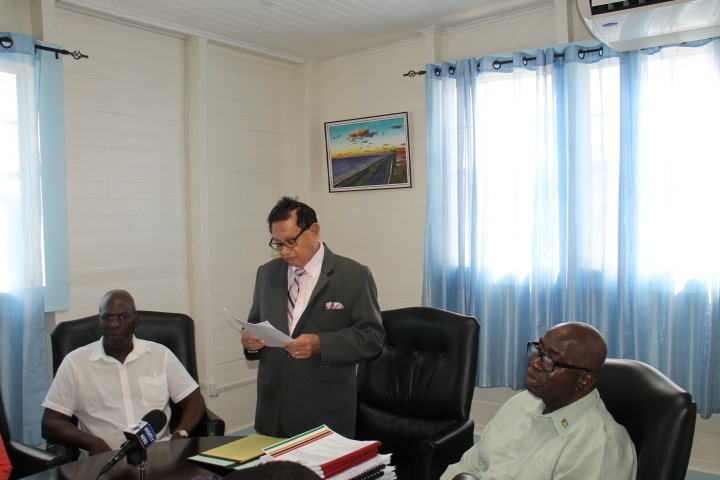 Chairman of the Commission of Inquiry into the operations of the Georgetown City Council, Retired Justice Cecil Kennard on Friday said the probe has recommended disciplinary action against Town Clerk, Royston King for the lease of land that does not belong to the City and for conducting such a transaction without  Council’s approval.

“The Town Clerk (ag) interpretation of the law is in my view acceptable. Hence, my recommendation in this regard is that the Town Clerk should be brought before a disciplinary tribunal of the Local Government Commission, as it is my opinion, that,he acted outside the scope and intent of the law on several occasions,” the Chairman said in his report.

Kennard recommended that further investigations in the form of a forensic audit to be conducted by the Audit Office of Guyana and that several officers be disciplined even as that audit is being conducted.

King is being cited for alleged gross Misconduct, abuse of office, recklessness, dishonesty, conspiracy, and misappropriation of funds.

Kennard, who was the sole Commissioner appointed by the Local Government Commission  to probe alleged irregularities and mismanagement in the administration of the City, found that King acted illegally.

Asked why he did not recommend that the Town Clerk be fired based on the evidence provided to the inquiry, Kennard said “not specifically, that he be disciplined.” “If he is disciplined and found to be woefully wrong, the Commission will do what it has to do. Disciplinary can include criminal charge, can be an in-house investigation but, as I said, he seemed to have misrepresented that the City Council owns the land claimed by NICIL which can amount to criminal things,” he said.

According to the report seen by Demerara Waves Online News, records provided and an inspection of the property show that the land belongs to NICIL, the National Industrial and Commercial Investments Limited,  while the transport provided by the Town Clerk is for Lot 18 Plantation La Penitence, which is not the location leased to and occupied by Quick Shipping Inc.; whose director is Paul Sandy. “What is evident also is that the company is occupying a portion of land which can be considered the continuation of Sussex Street, which may be under the control of the Council,” the report states.

One whether the payments for the lease actually  found their way into the City Treasury, Justice Kennard said two official receipts were presented but the first was “very questionable”. “What is questionable?: Mr. Sandy said his son walked with $625,000 to pay City Hall. I can’t imagine a person walking with such a large amount. Shouldn’t that have been paid by way of a cheque and when we look at receipt there seems to be some irregularity in the first receipt,” Kennard said. “I would presume that the last two payments were proper payments but the first payment for 2016 seems questionable,” he added.

The Commission of Inquiry Chairman said in the report that “the bankrupt state of the Council,this rental seems a bad decision and can only be seen in a corrupt light” because the annual rental works out to GYD$52,084.00 per month. “This is prime real estate land, and this price set by the Town Clerk is ridiculous. It seems as if he has given a gift to the tenant,” he said.

Kennard further recommended that NICIL considers Quick Shipping favourably since that company has spent a lot of money to develop the land. Further, he said the company should try to recover its rent paid in light of the misrepresentation made to it by the Town Clerk.

In relation to the no-confidence motion that had been brought by Councillor Sherod Duncan against the Town Clerk, the Inquiry Commission recommended that advice provided by King’s lawyer, Maxwell Edwards, be accepted that the motion be sent to the Local Government Commission.

Kennard indicated that the Town Clerk conspired with several councillors to abort the motion based on legal advice from his lawyer, Edwards, instead of Mayor Patricia Chase-Green seeking the advice of independent counsel.

It is also evident that there is collusion with the Town Clerk and key members of the Council, as it appears that no one seemed too interested in finding out what triggered the tabling of this motion and no one sought to redress the issues,” he said.

Justice Kennard criticised Mayor Patricia Chase-Green for not putting the motion. “It  is my considered opinion that Mr. Edwards was acting on behalf of the Town Clerk and not the Council, accordingly, the Mayor ought to have sought independent legal advice on the issue (motion). In any event, she did not deal with the motion as what was put to the Councillors was whether the advice of the Attorney –at- Law Edwards, should be accepted, which was totally wrong,” Kennard said.

Kennard also recommended that a yearly audit of the Council’s finance and systems be conducted, a storage facility  suitable storage for all financial documents is built and that  a qualified accounting personnel to hold the office of Internal Auditor should be employed.