Fire fighters to be charged in connection with stealing from crashed Fly Jamaica plane; advice pending for policemen implicated in theft of model planes 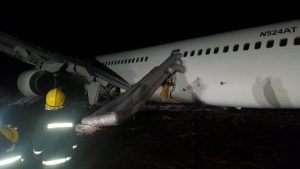 Four of the nine Guyanese fire fighters implicated in the alleged theft of items from a crash-landed Fly Jamaica plane, the Guyana Police Force said.

“One of the firemen will be charged with simple larceny and the others with Having under their control articles reasonably suspected to have been stolen,” force spokesman, Superintendent Jairam Ramlakhan said.

They are due to be arraigned shortly.

The pilot of the Fly Jamaica plane and a number of passengers have accused the fire fighters of stealing items from the plane. Fire Chief Marlon Gentle has already said one of the firemen had admitted to having been in possession of stolen items. His confession, Gentle had said, had led to the discovery of other stolen items at the Timehri Fire Station.

Meanwhile, the Guyana Police Force said it was still awaiting advice from the Police Legal Adviser on the case file in respect of the policemen implicated in the alleged theft of some model planes.

The planes were allegedly stolen during a reception held for delegates to last week’s Air Transport Meeting of the International Civil Aviation Organisation.