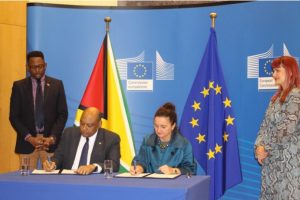 Guyana is preparing for domestic negotiations among several stakeholders to address several aspects of forestry governance before licences are issued, now that a Voluntary Partnership Agreement (VPA) with the European Union has been signed, authorities said.

The VPA seeks to improve the application of forest laws, strengthen forest governance and promote trade in legal wood products. Representatives of Guyana and the EU signed the VPA on November 23 in Brussels, ahead of each side signing and ratifying the agreement.

The Ministry of Natural Resources said Guyana now heads to the implementation stage and joins six countries; Cameroon, Central African Republic, Ghana, Indonesia, Liberia, and Republic of the Congo that have Forest Law Enforcement, Governance and Trade / Application (FGEGT) agreements with the EU. “In this implementation phase, all gaps identified during the field-testing exercise in July 2017 will be addressed to strengthen the entire system see the eventual issuance of FLEGT Licenses,” the ministry added.

The Guyana government ministry also explained that a National Implementation Working Group (NIWG) would be established through a “very transparent and open process where all stake holders would be invited to choose the members of the NIWG.” Additionally, it is planned to have all government agencies and ministries involved to establish a Governance Coordination Body. There will also be the creation of the Joint Monitoring and Review Committee with representation from both Guyana and the EU. The road map plan will contain activities by indicative timelines as well as cost estimates for the various activities of the implementation plan.  Work plan activities for the Implementation Phase will be coordinated by the NIWG. The Implementation Phase can take between 3-5 years with an estimated cost of US $30M.
|
Guyana, with its clear forest vocation, has an area of 16.5 million hectares of natural forest; 5.5 million hectares are devoted to forest management, which represents 35% of the forests, according to data provided by the Guyana Forestry Commission (GFC).

VPAs are among the elements of the EU Forest Law Enforcement, Governance and Trade (FLEGT), which the EU adopted in response to the global problem of illegal logging and associated trade. The Guyana-EU VPA will enter into force after both sides have ratified it, triggering a period in which Guyana will develop a system for verifying the legality of its timber products and will implement its other VPA commitments.

The Ministry of Natural Resources said in a separate statement that during the VPA negotiation phase, Guyana reached noteworthy milestones in terms of national legal framework, seeing Guyana finalizing various policy and legislative reforms, which include the revised Forestry By-laws and accompanying 2018 National Forest Policy Statement, and 2018 National Forest Plan. “Guyana was lauded for these achievements during the signing ceremony,” the ministry added.

The Food and Agriculture Organization of the United Nations (FAO) is helping to implement the FLEGT Action Plan in 25 tropical countries in Asia, Africa and America. Through this program, called FAO-EU FLEGT, implemented by FAO and funded by the EU, the governments of Sweden and the United Kingdom work actively in Guyana to establish several initiatives that encourage forest sector actors to use forests in a legal and sustainable, facilitating in parallel the negotiation and implementation of the VPA.

Guyana gave the VPA a high political profile at the national and sectoral levels. Guyana is one of 15 countries that was negotiating a VPA with the European Union. During the negotiations, it consulted representatives of indigenous peoples, agroforestry communities, and the private forestry sector and government agencies. These groups also benefitted during the VPA negotiations from donor-funded capacity-building projects.

“The success of FAO’s support to the FLEGT process in Guyana is based on facilitating a multi stakeholder dialogue or in simple words to get people and institutions to talk with each other. The vision of encouraging the dialogue is also visible in the variety of organizations FAO partnered with. Crosscutting through all the project is the spirit of getting people and agencies who have not had much contact with each other to communicate and to address the problems which require the collaboration of multiple agencies and institutions”, said Claus-Martin Eckelmann, FAO Regional Forestry Officer for the Caribbean was quoted as saying in the FAO statement.

The EU is a major global market for timber and timber products, with about 500 million potential consumers, a key market for timber products from Guyana. In 2016, the value of Guyana’s wood and wood product exports to the EU was US$2 million, which amounted to 5% of Guyana’s total wood and wood product exports, according to the Chatham House Resource Trade Database

Addressing illegal logging Illegal logging in forests causes social problems, environmental degradation and loss of important economic opportunities. With this agreement, Guyana will contribute to ensure that their forests are valued, managed and conserved for this and future generations.

The FAO-EU FLEGT Programme works providing technical and financial assistance through 7 projects in Guyana and an investment of more than half a million USD, promoting the creation and development of forest businesses and value chains of sustainable forest products with the aim of improving the governance and trade of verified legal timber products and the development of rural economies.