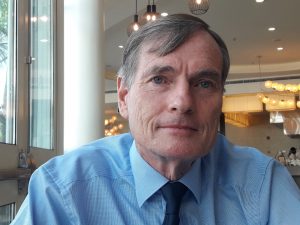 Guyana is being urged to conduct high-tech integrated mapping to locate and value existing and new mineral resources for effective planning and future investment, a senior official of a geospatial survey company says.

“One of our objectives in providing the tools to allow informed governance is to give a picture of the resource wealth of the nation. We can identify the prospectivity of different resources and we can provide ranges of estimations as to what they are likely to be worth and that gives the government a much clearer picture,”AMTEC Resources Management Ltd.’s Executive Vice President, Simon Tattersall told Demerara Waves Online News.

AMTEC Resources Management Ltd; which has mapped  several African and Latin American countries, has been pitching its services to the Lands and Surveys Commission and the Guyana Geology and Mines Commission about the importance and benefits of acquiring sophisticated mapping banks.

“It’s important to manage any kind of activity that has a geographical aspect to it without having a proper and accurate and up-to-date mapping database. I think it will be expected by the mining investors, it will be a prerequisite to any interest in any investing so a crucial first step is to make sure that anyone has that very accurate digital database of the country” Tattersall said.

Tattersall said the aerial mapping, with a sophisticated pinging system, allows the scientists to identify the presence of various types of mineral resources, populated areas, nature reserves and other features.

Asked what were the prospects of AMTEC being hired to map Guyana, Tattersall expressed confidence that eventually Guyanese authorities would be convinced to getting the job done. “We are here because we believe the country needs it. We believe that we are the right people to do it and we believe that there is a genuine interest, a genuine desire for more responsible digital governance and we have to remain optimistic that we will be able to progress this project,” said the AMTEC official who was recently in Guyana.

Broadly, the AMTEC official said mapping, survey and non-linear administrative information such as usage and boundaries could take less than three years. He said the database, which remains the sole property of the State of Guyana, could be constantly updated.

Tattersall suggested that his company was not in a hurry to land a deal with Guyana but was more interested in convincing all of the stakeholders. “We are basically trying to sensitize as many different potential stakeholders as to what the issues are in a way that they can conclude that this is the only way forward rather than have us dictate what we think is the way forward,” he said.

AMTEC, which is registered in the British Virgin Islands, says it has worked in Guinea, Kenya, Tanzania, Zambia, Zimbabwe, Sudan, Yemen, Botswana, Egypt, Saudia Arabia, Zaire and Somalia. The company says it has also done mapping in the United Kingdom, Canada, Bolivia, and Costa Rica.