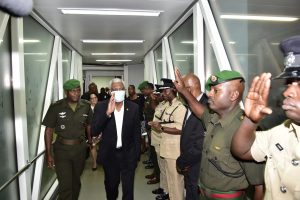 In a government-issued photograph, the President was seen wearing a surgical mask to minimize the chances of contracting any infective agent.

The President who was accompanied by his wife, travelled to the Republic of Cuba on October 30, 2018 to undergo a medical investigation.

While in Cuba, President Granger was diagnosed with Non- Hodgkins Lymphoma after an intensive series of tests by specialist doctors at the Centro de Investigaciones Medico Quirugicas (CIMEQ) in Havana.

Given the diagnosis of Non-Hodgkin Lymphoma, the President’s Medical Team has performed a number of medical interventions including the first round of chemotherapy treatment. The President has responded well to the treatment and was given approval to return to Guyana.

President Granger once again expresses profound gratitude to all those who sent their well-wishes for his full and complete recovery.