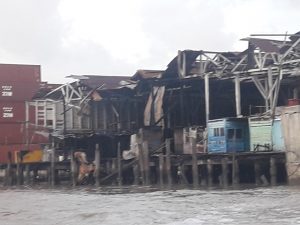 A burnt section of the dilapidated Stabroek Market wharf.

A domestic dispute between two Stabroek Market wharf stallholders ended with a man being stabbed and burning of his stall that quickly spread to others, sources said.

The name of the Male fish vendor has been given as “Chop Up”. He was treated at a hospital and sent away.

The sources said the woman had a misunderstanding with her partner over some money she had allegedly stolen from him.

She reportedly told by him not to return to his stall and they had a scuffle.

During the altercation, sources said she allegedly stabbed him

When he left to report the incident to a nearby police station, she lit the fire at his stall and fled the scene. 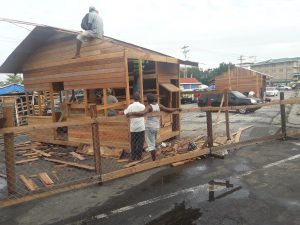 The fire has come at a time when stallholders at the decades-old dilapidated Stabroek Market wharf have been ordered to remove and take up positions at the former East Bank Demerara bus/car park.

Currently, stalls are being constructed at the former bus/car park.