President Granger returns on Tuesday from Cuba; to be monitored by doctors 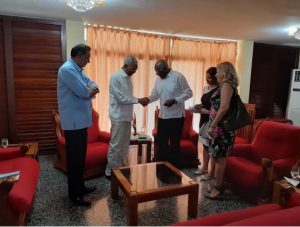 Nagamootoo said Granger’s condition would be monitored by his physicians.

The Cuban embassy in Guyana said Granger has “received the first round of chemotherapy treatment and, according to the medical team, has responded very well.”

The Guyanese leader left Guyana on October 30 for Cuba where was diagnosed with non-Hodgkins Lymphoma. He received chemotherapy last week.

Given the diagnosis of Non-Hodgkin Lymphoma, the President’s Medical Team has performed a number of medical interventions. Thus far, His Excellency, the President,

“With the President’s highly specialized medical care and treatment for nearly three weeks – and his positive response to the medical interventions and treatment – his Medical Team of Cuban Specialists has given approval for him to travel to Guyana,” the Cuban embassy added.

He is due to arrive on Tuesday, November 20, 2018, and will arrive in Guyana on the evening of the same day.

“The President continues his daily routine of work, treatment and rest under the supervision of his Medical Team,” the embassy added.