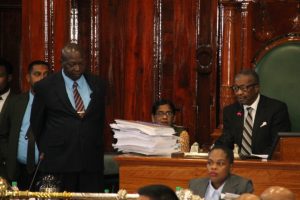 The opposition People’s Progressive Party (PPP) objected strenuously to efforts by House Speaker, Dr. Barton Scotland to cut the number of hours allocated for consideration of 2019 budget estimates for constitutional agencies and the Parliament Office’s failure to provide details of the proposed expenses for those entities.l

Before calling on Finance Minister, Winston Jordan to begin presiding over the estimates, House Speaker Barton Scotland said the time allocated would be 2 hours 40 minutes instead of five hours as had been the case last year.

However, Jordan did not get to proceed because PPP Chief Whip, Gail Teixeira and PPP back-bencher, Juan Edghill registered their concerns. Apart from the time-restrictions, Edghill said the information, including, notes, write-ups, justification and information, be made available to all parliamentarians. 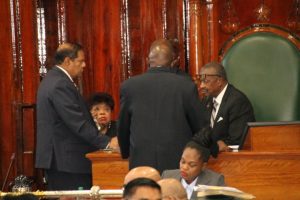 “This is the business of the House…We want it, we are entitled to it,” added PPP front-bencher Priya Manickchand after the Speaker presented a thick pile of documents that he admitted should have been provided to parliamentarians. “We will need to proceed with the work we have outlined today,” he said.

The Speaker said there was the option of printing 65 other copies of the pile of documents, to which Manickchand said the Parliament office had two weeks to do.

As far as the time allocation was concerned, Teixeira argued that “procedures don’t trump our constitution”.  “This is obscene, Mr. Speaker, this is obscene,” she added. She said the cut in the number of hours would mean that parliamentarians would only be allowed 10 minutes instead of 20 to scrutinise the spending such as cuts or increased allocations by the Finance Minister.

Teixeira highlighted the PPP’s concerns were discussed at a meeting of the Business Sub-Committee but government representatives did not attend that meeting last week. She reminded the Speaker that he had given an undertaking to have another meeting held, but that was not done.

After a 40-minute delay, the House Speaker announced a suspension of the sitting to allow for a meeting of the bipartisan Business Sub-Committee.

2018-11-19
Denis Chabrol
Previous: President Granger returns on Tuesday from Cuba; to be monitored by doctors
Next: PPP fails to restore budget cut to constitutional agency