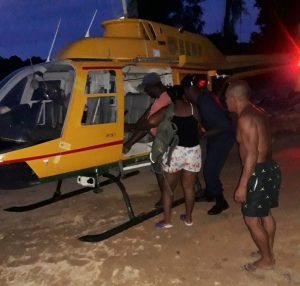 A Guyanese policeman was shot and injured by a Venezuelan Sindicato gang member as the law enforcement officer was travelling to a location named Baboon on the Guyana side of the border, a senior police officer said.

“He is stable. We found him and we are making arrangements to medi-vac (evacuate) him to Georgetown,” the officer said. He declined to divulge the name of the Corporal for family reasons.

The incident occurred at about midday Tuesday. The senior police officer said the service weapon that was in possession of the Guyanese police corporal was not stolen.

Sources said a Guyana Defence Force (GDF) helicopter flew him from a remote gold mining camp, where he has received some care, to Eteringbang. The chopper landed at about 6:30 PM.

From there, he was placed on a Caravan and air-dashed to the Georgetown for further treatment at the state-owned public hospital.

The high-ranking senior police officer said no one has been arrested as the perpetrator was on the Venezuelan side of the border when he opened fire on the boat. The boat, sources said, was being captained by a man who hails from Bartica.

It is believed this is the first time that a member of the Guyanese disciplined forces has been shot by the feared Sindicato gang.

Up to late Tuesday afternoon Guyanese soldiers were expected to make another effort to locate the camp where the injured policeman is waiting to depart.

Sources said the boat, with the Guyanese policeman, refused to stop at the checkpoint being manned by Venezuelan Sindicato gang members on the Cuyuni River.