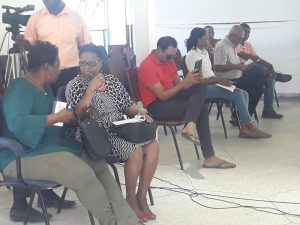 PNCR General Secretary, Volda Lawrence (seated second from right) and other contestants and representatives of political parties listening to the declaration of results by the Returning Officer for Georgetown, Duarte Hestberger.

Chairman of the People’s National Congress Reform (PNCR), Volda Lawrence Tuesday afternoon down-played A Partnership for National Unity’s (APNU) loss of several seats on the Georgetown City Council at Monday’s general elections as an unhealthy sign going into Guyana’s next general elections due in another two years.

“When you speak of so many seats with a turnout of that number, certainly one would expect that a low voter turnout at that level would have affected everybody so we don’t see it as a loss but we see it as taking stock of the fact that we need to do more to educate people more about local government and that this is their thing,” she said in response to questions from Demerara Waves Online News. Lawrence said another reason for the low turnout was that “there were personal expectations that did not materialise and so a few people felt, at this time, that they shouldn’t exercise that franchise within their constituency”.

Asked to respond to claims of discontent broadly among APNU supporters and vendors still being upset at being hounded out of areas at Stabroek and Bourda Markets under the watch of the last Mayor and City Council, Lawrence said that “I think a very deep analysis needs to be done because you go to various constituencies and they have various issues” across Guyana, not only Georgetown.

Pointing to a 28.3 percent turnout from among the 119,734 eligible voters, Lawrence said that figure was not a good barometer to measure popularity going into the 2020 general election. “It says to us that there is much more to be done on the ground one-on-one with people and we got to get out there and get the job done. In terms of 2020, I am not going to base this on 2020. I believe that people see 2020, the national elections, as a must as opposed to local government elections which many people think ‘I don’t understand’,” she said.

Touching on the make up of the 15 constituencies of Georgetown, the PNCR Chairman hinted at the possibility of breaking up some of the constituencies to give elected officials smaller areas to manage. “Georgetown has expanded. There are more persons living in Georgetown. The areas are very, very wide and dense and so is it that two persons alone can have that chance alone to sit at the horseshoe table to represent an entire constituency?,” she said.

However, General Secretary of the opposition People’s Progressive Party (PPP), Bharrat Jagdeo said his party gleaned that PNCR supporters in places such as southern Georgetown, Sophia and other PNC strongholds did not turn out in large numbers to vote. He said his party would continue to target them as the country heads into general elections. “We will keep going back to those people over and over because they didn’t want to give us the vote; they didn’t give APNU. We have to go back to them and see what our plans are and to get them not to stay away the next time, not to give any one the vote but we want them to vote for the party,” he said.

Jagdeo said nationally, the PPP got almost 46,000 votes more than APNU and AFC at this year’s local government elections.  Among the areas, Jagdeo said PPP now controls, is Buxton-Foulis Neighbourhood Democratic Council. He noted that the PPP also won the towns of Mabaruma and Lethem in addition to their traditional towns of Anna Regina, Rose Hall and Corriverton. Jagdeo also pointed out that the PPP won one seat in New Amsterdam and performed fairly well in Bartica although it did not clinch sufficient votes to get a seat.

AFC Executive Member, Michael Leonard told reporters that the 2016 local government elections were contested by APNU and AFC jointly and so “they were obviously riding the success of 2016 so there was no true test to see what is the constituency of the AFC versus the APNU”. 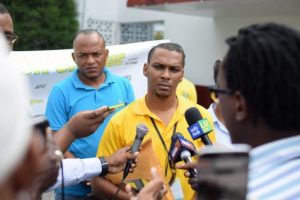 Leonard doubted that the AFC’s poor showing would weaken its negotiating power with APNU for a successor to their 2015 Valentine’s Day political agreement, “Cummingsburg Accord”. He stressed that APNU could not win an election on its own and every vote would count. “I don’t believe so. It is very clear from the results across the country that the APNU by themselves cannot defeat the PPP so it seems as though the coalition is necessary,” he said. Asked what the AFC would be taking numerically to the table, Leonard remarked “if what puts you over the threshold to get the presidency or to get the majority is one vote,  then it’s one vote. Every vote counts, every seat counts,” he said.