Oil money makes 2020 “the mother of all elections”- Finance Minister 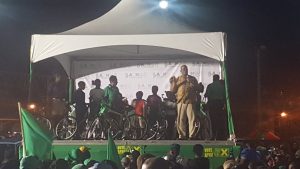 The incumbent A Partnership for National Unity (APNU) has set the tone for the 2020 general elections, saying that oil would be the battleground to determine which party would get its hands on the oil revenue

Finance Minister, Winston Jordan appealed to party faithful at the last 2018 Local Government Elections public meeting before Monday’s vote that they must ensure that they register at next year’s house-to-house registration so they could vote in general elections due the latest by August 2020. In his maiden political campaign speech at the meeting held at the Stabroek Market Square, he said the next general elections would be crucial for Guyana.

“The next election is the mother of all elections ever in this country. You know why? Because  the oil would be coming on stream and they all want their hands on the oil. We have to keep those thieves away from the oil resources,” he said to some applause from among the estimated 400 attendees at the meeting held at the Stabroek Market Square.

Jordan expressed concern that after years of struggle for the right to vote freely without conditions such as colour and property ownership, it is “heart-breaking and heart rending to hear people say ‘me ain’t gat time wid duh'” because to abstain is in reality to vote for the other party, in apparent reference to the People’s Progressive Party (PPP).

In clear reference to the construction of several posh houses on former government lands at Goedverwagting-Plaisance, Jordan said even without the oil “they built big mansions on our forefathers lands, on the sweat and blood of our forefathers and they did not even access to the oil resources”. The Guyana Police Force’s Special Organised Crime Unit (SOCU) is continuing its two-year old probe, including questioning former President Bharrat Jagdeo and many of his then Cabinet members, but so far no one has been charged in connection with those land sales.

He warned supporters of the People’s National Congress Reform-dominated APNU they would be robbed of the oil wealth if they “allow that other government” to return to office. “If they get their hands on those oil resources, cat will eat your dinner,” as he urged them to spread awareness about the political implications of the massive oil revenues expected to pour in.

In issuing a stirring appeal, the Finance Minister cited the integrity of President David Granger as an “honest, God-fearing person who has the interest of this country at heart and with him leading us again in 2020, you can be assured that the oil resources will be invested in your interest”.