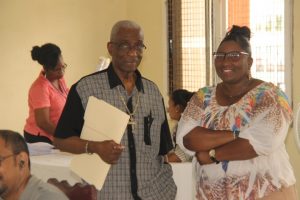 Even as the Guyana Elections Commission boasted it was ready to conduct Local Government Elections in villages and towns across the country on Monday, three polling day officials were barred from working because they are related to candidates, a commission spokeswoman said Sunday night.

“Based on the feedback that I have received, we are set and ready for an early start tomorrow (Monday) morning in terms of the stations opening from six O’clock,” GECOM’s Public Relations Officer, Yolanda Ward told Demerara Waves Online News.

She confirmed one presiding officer and two polling clerks would not be able to work on LGE Day because A Partnership for National Unity (APNU) candidate is the husband of the wife of the presiding officer and their two children are working at two polling stations in the same Local Authority Area. Demerara Waves Online News was informed that the observation was made in constituencies five, seven and eight of the the Buxton-Foulis Local Authority Area.

Ward said as the Deputy Returning Officer was Sunday afternoon making her final rounds at the polling stations, someone informed her that the candidate is connected to the woman and their children. The spokeswoman said if such information had been received much earlier, those elections day personnel could have been deployed to other constituencies.

“Once that information was filtered to the Returning Officer, the Returning Officer called in those persons, had a discussion with them to indicate to them because it is the Proportional Representation component she will not be able to move them around into different constituencies because time is so late there is no placement out of the Local Authority Area at this point so she informed them that they might not be able to maintain those positions that they were initially offered so quickly made some adjustments to make sure the gaps are filled,” Ward told Demerara Waves Online News. Ward said the APNU agent did not object to the concern raised by the GECOM official.

Polling day staff were during training told to declare their links to candidates as part of the election management authority’s system of transparency and accountability. At that time, she said a number of persons had opted out of the training due to concerns about potential conflict of interest while others stayed on and opted to work outside the Local Authority or the constituency.

As far as preparations are concerned, she said polling day staff were expected to complete all preparations by 6:30 PM Sunday and prepare for the movement of materials at 2 AM from central locations in the regions to polling stations. The deployment is expected to be completed by 4:30 AM in time for voting to begin at 6 AM.

GECOM says 573,923 persons are eligible to vote at 1, 676 polling stations in the 80 Local Authority Areas that have been divided into 596 constituencies. There will be a ‘no contest’ in one of the constituencies.

The elections management authority says it is ahead of its preparatory timelines officials there have set internally. She disputed reports in sections of the media of chaos and confusion. “I think our operational processes were smooth. We hadn’t any hiccups. Like in any process, even if there were minor glitches it could not have been something that could not have been easily remedied,” the GECOM spokeswoman added.