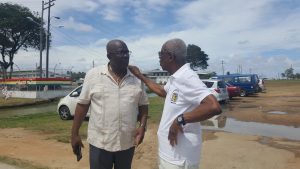 A number of members of Guyana’s State security services were Friday unable to vote because their names were not on the voters’ list where they were stationed, but the Guyana Elections Commission (GECOM) said provisions would be made for them to cast their ballots with the rest of the population on November 12.

“I’ll be doing a coordinating meeting with the police and the army to state clearly that these ranks, not of their own volition, they were off the list and make alternative arrangements for them to go at their place of residence to vote in their villages or in the municipality of Georgetown or wherever to exercise their franchise on November 12,” GECOM’s Chief Elections Officer, Keith Lowenfield told reporters.

Friday was set aside for police, soldiers, prison service personnel and fire fighters to vote on Friday ahead of the general population.

Lowenfield said he has received reports from a number of interior locations and in Georgetown that a number of personnel could not have voted because their names were not on the voters list, despite the fact that the elections management authority had made arrangements with the security services.

“The issue of ranks being on the list of the services is a function of the particular service providing us with the names of their ranks and the locations where they are stationed at this point in time. One of the things, for example, we lamented on in our deliberation with Deputy Commissioner (Maxine) Graham is for there to be no transfers prior to,” he said.

For example at the Mahdia Police Station and Imbotero, Mabaruma ranks said their names were not on the list, but “I don’t want to conclude that based on those two reporting from those hinterland locations that that is the trend across the hinterland locations,” he said.

Lowenfield said GECOM would coordinate with the security services to allow those members, who did not get ti vite today, to exercise their franchise on November 12.

GECOM Chairman, Retired Justice James Patterson also told reporters that voting was “slow” because they were still on duty.

For his part, Lowenfield cited the need for greater education about the importance of local government elections among members of the Disciplined Services.