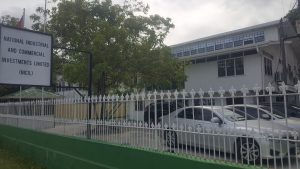 The Camp Street, Georgetown-based headquarters of the National Industrial and Commercial Investments Limited.

The Special Purpose Unit of the Guyana government’s holding company for government assets on Friday released the names of the five companies that have bid to buy out the four estates of the state-owned Guyana Sugar Corporation (Guysuco), but did not disclose the details of the entities.

A senior official of Demerara Distillers Limited (DDL) did not tender for Enmore Estate, as had been widely expected. The company was expected to late Friday disclose why it decided not to do so although it had even partnered with government to produce molasses for its rum production.

The SPU of the National Industrial and Commercial Investments Limited did not on Friday provide any details about the countries in which the companies were registered and who are their director. Numerous calls to the Head of the Special Purpose Unit, Colvin Heath-London went unanswered and  they were not returned.

When consultants from PricewaterhouseCoopers on Thursday first confirmed that a Florida-registered company, with connections to the Middle East, was interested in buying all three estates, there was no indication of a Guyanese connection.

Ragindra Persaud is the Chief Executive Officer of Nand Persaud and Company.

Government wants interested companies, if successful, to remain in the sugarcane industry to utilise the machinery and other infrastructure that are on the selling block and rehire some of the thousands of workers who have been laid off as a result of the closure of those estates earlier this year.

NICIL has, however, been restarting operations at Skeldon, Albion, Rose Hall and Enmore to keep them as going concerns rather than allow them to depreciate further.

2018-11-02
Denis Chabrol
Previous: Some Joint Services members couldn’t vote in Local Government Elections; to vote on Nov 12
Next: DDL opts out of bidding for Enmore estate