The National Assembly Wednesday night unanimously approved  GY$2.451 billion to pay remaining severance to 4,723 sugar workers who have been laid off with the closure of several estates across the country.

The results of a division (count) showed that 62 parliamentarians voted in favour of the amount after a spirited series of questions posed by the People’s Progressive Party’s Komal Chand who is also President of the Guyana Agricultural and General Workers Union (GAWU). 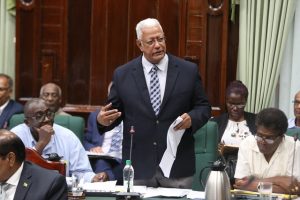 With the Chief Executive Officer of the Guyana Sugar Corporation (Guysuco), Harold Davis by his side, Minister of Agriculture Noel Holder eventually relented and disclosed the number of ex sugar industry workers who would be paid severance.

At first, Holder said all of the 460 workers at Wales would be paid severance and later, under intense pressure, disclosed that it would be 501 workers at Wales; 1,504 at East Demerara; 848 at Rose Hall and 1,755 at Skeldon.

However, Holder staved off several attempts by Chand, Gillian Burton-Persaud and Gail Teixeira to ascertain when the severance would be paid. He said “as it stands we don’t have any money” and it would all depend on if the Assembly approved the requested amount.

As the count was being taken by Clerk of the National Assembly, Sherlock Isaacs, PPP parliamentarians heckled sounds of victory. As Irfan Ali voted for passage of the requested funds, he shouted “two years of struggle, finally” in clear reference to his party’s agitation in the sugar belt and its political stronghold for the monies to be paid.

In reality, though, government would be paying the remainder of the severance before year-end as had been promised earlier this year.

Turning their attention to Prime Minister Moses Nagamootoo, who hails from Whim Village, Corentyne-where he recently visited to whip up support for the Alliance For Change for the November 12 Local Government Elections- Ali suggested that villagers there do not want to see him.