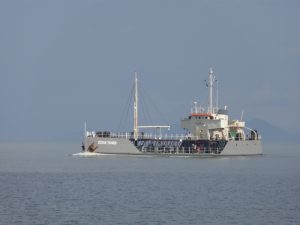 Police in Grenada have confirmed that a Guyanese man died aboard the MV Ocean Trader – a Guyanese registered ship- that was docked in Grenada last weekend.

An official from the Grenada Port Authority explained that whenever there is a fatality onboard any ship in its waters, the nation where the ship is registered must be notified. “We have already done this and cannot share further details about the cause of the fatality,” said the official who is in a management position.

Guyana’s Maritime Administration (MARAD) has confirmed that the vessel is indeed registered there and was informed about the fatality. The official said the owner of the vessel, Mr. F. Amin, would be contacted and he is expected to take full responsibility for the body.

The boat, which was docked at the St George’s Cargo Port, was visited by officers from the Criminal Investigations Department and applied the required protocol following the report. “On arrival, they observed the motionless body of Permanand Permaul alias “Short Man”, 41-year-old citizen of Guyana lying on his back on the deck,” said an official report to authorities.

“The officers met and spoke with Yuvraj Persaud, 36 yrs. old Captain Master a citizen of Guyana who stated that on October 27th about 22:30 hrs, he was inside his cabin sleeping when one of the workers informed him that Permanand who was cleaning inside one of the tanks got knock out. As a result, he made checks and saw him lying on the floor,” the report said.

The report said that the captain sought assistance and gave the deceased Cardio-Pulmonary Resuscitation (CPR) but that did not revive him. A doctor was then called to the scene and declared Permaul dead.

An undertaker took possession of body which is expected to be flown out of Grenada to Guyana on Thursday. Police have not shared the autopsy results with the media.

Linda Straker in Grenada contributed to this report