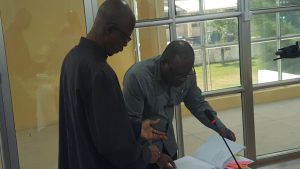 Retired Chancellor of the Judiciary, Cecil Kennard Monday afternoon ruled that the Commission of Inquiry into the administration of Georgetown was legally established, paving the way for Town Clerk Royston King to take the stand.

“I have come to the conclusion that this inquiry was properly set up and the inquiry will now continue”, Kennard said in pointing out that for weeks now he had been researching the issue since receiving King’s affidavits.

Given the magnitude of such an investigation “demands that the inquiry be conducted by a trained legal person and not laypersons who are Commissioners of the Local Government Commission Act.

Kennard, who has 56 years of legal practice, said in coming to his decision he adopted a realistic approach to determine whether the Local Government Commission could not delegate some of its functions.  The jurist reasoned that interpreting legislation must be done strictly  and also a “commonsense approach to the situation”.

Under instructions from his Attorney-at-Law, Maxwell Edwards, King began his much anticipated testimony “under protest”.

Before the afternoon’s proceedings wrapped up, Inquiry Commission Chairman Kennard assured the Town Clerk that there was no need to worry and the probe would only act on evidence before it. “Mr. King, thank you for coming and you have nothing to fear,” the retired judge told the Town Clerk.

“We can only act on the evidence before us,” he added.

Documents have since surfaced, showing that the plot of land at Mud Lot 1, Lombard Street that the National Industrial Commercial and Investments Limited is actually transported to the Georgetown City Council dating back to 1966. That wharf area has  since been leased to  Quick Shipping Inc. whose principal is Paul Sandy.

The Town Clerk is embroiled in a huge controversy over allegedly leasing land that does not belong to City Hall, while at the same time receiving payments in his personal capacity.

The afternoon’s proceedings largely centered on the poor state of the Municipality’s historical records. King, who was first employed as a Public Health Officer and then moved on to become the City’s Public Relations Officer, said he had overseen a project in which the National Archives had been involved in some preservation works that date back to the 1700s and 1800s but the Council had been unable to sustain that project due to a shortage of financial and human resources. 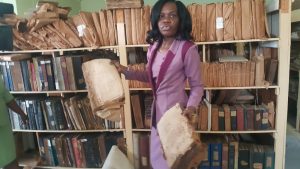 “As Town Clerk, I’m painfully aware of the poor storage of the records,” King said, to which Kennard responded. “the records are in a sad state of affairs”.

Admitting that the records were in an unsatisfactory condition, King said that was the reason he this year asked the City Council for approval to establish a Documentation and Information Technology Centre that would be responsible for storing the records properly.