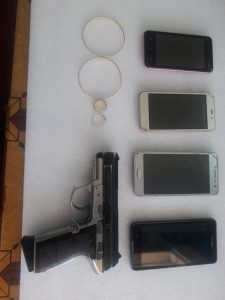 A known character of Zeelugt, East Bank Essequibo was shot dead by police after robbing a couple at their home in the same village, the Guyana Police Force said.

One of the robbery victims is 38-year old Gaitree Persaud.

The suspected deceased bandit has been identified as 19 year-old Noel ‘Kevin’ Kissoon who was previously convicted for break and enter and larceny.

He  currently has four pending matters before the court for robbery under arms, rape and possession of naracotics.

Additionally, police said Kissoon was wanted for several recent robberies and  an alleged indecent assault of a female.

Kissoon, of 808 Zeelugt New Housing Scheme, was reportedly armed with a handgun assaulted and robbed a Zeelugt.

Police said stolen articles have been recovered and the victims have received medical treatment and discharged.

Investigations revealed that the victims,  a husband and wife, were relaxing in their veranda about 7 PM ,when a male brandishing a handgun pounced and relieved them of a sum of cash, four cellphones, two gold bands and a finger ring and escaped.

Kissoon allegedly struck the victims on their heads with the firearm.

Based on information received, about 5:45 AM Police proceeded to the suspect’s home where on arrival,he allegedly exited with a handgun brandished and in a menacing manner pointed the firearm at the ranks. He was shot once in the lower region of his abdomen.

He was rushed to the Leonara Cottage Hospital and was pronounced dead on arrival.

Police said the female victim’s finger ring was found on one of the deceased fingers whilst the other items, except the cash, were found in his house.