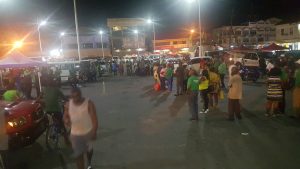 Despite an unusually big blaring loudspeaker and a well-illuminated Stabroek Market Square, A Partnership for National Unity (APNU) attracted a very small group of visibly attentive attendees at a Local Government Election (LGE) campaign meeting that failed to deal with many concerns.

Georgetown has been traditionally recognised as a stronghold of the People’s National Congress Reform (PNCR), the biggest party in APNU, but the core group of attendees numbered just about 100 persons. Most of them appeared to be activists as well as incumbent Councillors who are candidates for the November 12, 2018 Local Government Elections. That number eventually dwindled to about 70 due to intermittent showers.

Just before the featured speaker, Public Health Minister Volda Lawrence, was about to take the podium, activists urged the small group of persons to go closer.

None of the eight speakers, including three current councillors- Ivelaw Henry, Heston Bostwick and Monica Thomas- mentioned problems concerning alleged corruption and poor management of the City, the ongoing Commission of Inquiry into the administration of Georgetown, the apparent unilateral removal of vendors from Stabroek and Bourda Market areas by the Town Clerk, Royston King and the controversial parking meter contract

City Mayor, Patricia Chase-Green and Deputy Mayor, Akeem Peter were among those attending the meeting, but they did not address the gathering. Referring to vendors, Henry said APNU has the welfare of vendors “high on our agenda to improve”. “This is an area we want to focus on. We don’t want to throw them away… This is high on our agenda to improve their lot to bring some housing to them, improve in terms of finding a place for our vendors, a shelter for them,” he said.

All of the speakers bashed the opposition People’s Progressive Party (PPP) for the garbage-filled and poorly drained state of Georgetown up to 2015 when it lost general elections, its failure to hold local government elections in 23 years, and poor physical infrastructure. President has  kept his promise that LGE would be held every three years, the first having been held in 2016.

APNU speakers took credit and highlighted improvements bridges, drainage in communities such as Lodge, Albouystown-Charlestown, playgrounds and many roads in Georgetown.  Most of the resurfaced roads were not done by the cash-strapped Municipality but by Central Government through the Ministry of Public Infrastructure.

Bostwick urged the citizens of Georgetown to vote for APNU because they need locally elected representatives who can lobby ministers to make improvements to their communities. “We know that our ministers have other duties and that is why we ensure that local government elections will always be kept every three years because when you will find it difficult to go to tell a subject minister of a particular issue, you elect your councillors and they will approach the ministers. They will approach whoever they have to to bring relief and satisfaction to you in your various constituencies,” said Bostwick who is well-known for his community activism in southern Georgetown.

Councillor Henry accused the PPPC of fooling the electorate with a campaign gimmick that the already paltry rates and taxes- amounting to between GYD$11,000 and GYD$15,000 annually, about GY$40 per day, in many instances would not be increased. “That is just a false statement that you are not going to improve rates. I don’t think we want to improve rates but for years the City has not had new valuations for housing,” he said. Central government and a Canadian firm recently signed a multi-million dollar contract to valuate properties in  towns and villages, but Local Government Minister Ronald Bulkan has said the Councils would have to decide whether to increase rates based on new valuations.

Minister Lawrence, for her part, referred to instances during the life of the current council in which garbage had not been collected. She said that although that was due to low taxes garbage was still being collected. “One-one time during the last two years of this Council, they had some problems with garbage collection and everybody wanted to make it a big issue but you know something, if we be truthful to ourselves, plenty people ain’t paying taxes, plenty people living free but what – our garbage is being removed every single week, comrades. Every single week our garbage is being removed from our premises and that is what we are talking about. We are talking about you electing your people who will ensure that progress continues,” she said

City Hall recently cut back in garbage collection in several areas because huge debts to the private contractors have  piled up.

Lawrence, who was recently elected Chairman of the PNCR, said even roads in communities that do not support APNU have been improved.

The meeting suffered a minor disruption when someone lobbed a squib near a few persons. Less than two minutes, a group of the attendees rushed to a young man on Water Street outside the Stabroek Market shouting “hold he, hold he”. A senior executive member of the PNCR’s youth arm almost immediately intervened and rescued the boy from the angry mob.

Public Health Minister then hinted, in her address, that the incident might have been the work of opponents. “Whenever you are talking and you are hitting them, they will send all kind of provocateurs in the midst. You does always know when you touching them, comrades. Comrades, well I want to say to them that they can do whatever they like because even if I fall down here, Comrades, another Rasta will going come and take my place, Comrades, so you ain’t doing nothing. You can’t stop progress. The APNU is here to stay, Comrades,” said Lawrence.