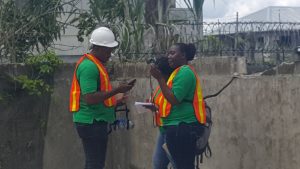 Guyana’s Environmental Protection Agency (EPA) on Tuesday conducted another round of air quality tests near the site of bubbling natural gas emissions at Diamond, East Bank Demerara, even as residents complained about feeling unwell.

Executive Director of the EPA, Dr. Vincent Adams assured residents at the scene that his entity and the Guyana Geology and Mines Commission (GGMC) would be working closely. “We need to understand what the problem is before we try to resolve it and maybe GGMC or somebody knows,” he said. “I got here listened to the concerns and obviously I’m going to go back and communicate with the other agencies that are working thus for us to figure out,” he added.

A spokesman for the residents said they wanted to know why the GGMC was constructing huge steel tanks on site,  whether the gas and sludge would remain there and if they would have to remove. “All that we know is that they are building some big tanks here. In the night we get some very stink smell of the gas. The gas is going on about five months now and no one us telling us anything,” said Richard Phagoo whose house, located a short distance away, was cracked by the violent eruptions in June and August, 2018.

Phagoo and other residents complained bitterly about a lack of information from authorities about what the tanks would be used for, what the gas would be used for and how safe would the residents be. He said more than 20 letters have been sent to several ministries but none has responded so far. 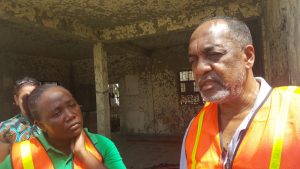 Redmond said a number of previously conducted tests had shown emissions of nitrogen oxide and volatile organic carbons. “Though it was recorded, it wasn’t recorded in alarming amounts. All emissions were below two Parts Per Million (PPM),” Redmond said.

Asked what could be the impact of prolonged exposure to that level, she said resident’s accounts suggest that was not the case. “They indicated that they tend to pick up the scent of rotten eggs sometimes during the morning periods so it’s not prolonged continuous exposure,” he said. Redmond said residents were told to visit a doctor to ascertain what might be causing them to feel unwell because the gases might not be the only reason for such symptoms.

The EPA officials planned to conduct ongoing monitoring because the levels could fluctuate. They spoke with residents while more than one dozen spots were bubbling gas through a puddle of water.

Region Four Chairperson, Geneveive Allen has said that a multi-stakeholder group would be established to meet with residents. 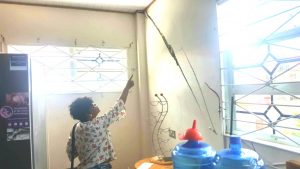 Gail Williams -Fraser pointing to one of several cracks to her house as a result of undermined foundation due to a natural gas explosion next door.

Immediately next door to where the gas erupted when a man was drilling a water well, a remigrant Gail Williams- Fraser said her retirement home that she built in 2015 has been badly damaged. Many of her doors have been locked off, walls cracked and floors sunk due to the fact that the foundation has been undermined.

The 62-year old woman, who has been in Guyana since June in search of answers and solutions to her plight, says she now risks losing her job in the United Kingdom because she has away for the past four months. “I came here because of this problem. I had to go back to work on the 7th of  September but I’m still here. Nobody came to speak to me on to now so I think at the end of the day I might lose my job. It’s not Guyana,” she said, adding that she has already spent a lot of funds on airfare and telephone charges. 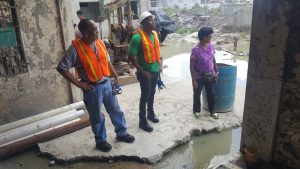 EPA Director, Vincent Adams and team at the scene of the natural gas emissions.

“I’m stuck here for now until this ends and and I don’t know when it’s going to end,” she said.

Williams- Fraser said an engineer charged her GYD$400,000 to visit the yard and building that are now sloping gently towards the east.

She has already ordered a tenant to remove after the woman refused to pay any rent due to the damage.