Suspect shot, two others and minibus detained at Bourda Market 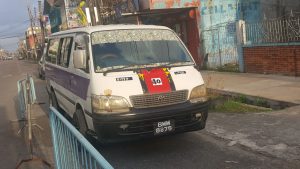 A man was shot at Bourda Market early Sunday morning, two other men arrested, a Route 40 minibus detained and a handgun seized from the injured man, City Police said at about 02:10 AM observed the men between Robb Street and North Road acting in a suspicious manner.

As he was approaching the men, one of them later identified to be a 21 year-old miner of Pouderoyen, W.B.D allegedly whipped out a handgun and pointed same at the guard who instinctively discharged his weapon several times at the gunman, who collapsed a short distance away. An unlicensed .32 pistol with six  live matching rounds, was retrieved next to the injured suspect.

The other suspects are a 34 year-old of Nelson Street, Mocha, E.B.D and a 23 year-old of Pike Street, Kitty.

City Police sources said a guard attached to a private security security and City Police on duty called on the man, who was seen acting suspiciously, to state his business.

However, the suspect drew a firearm and the guard opened fire with a shotgun, hitting him.

The handgun was reportedly taken away, lodged at the City Police Outpost at Bourda, and the injured man was rushed to the Georgetown Public Hospital.

The bus and the other men were on Alexander Street, Georgeown at the time of the shooting.

Sources said the injured suspect is refusing to cooperate with investigators. He has given three different names: Shien Anderson, Shien Addison and Shien Alison. 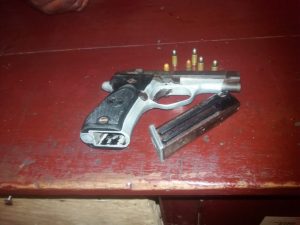 A minibus without a rear licence number plate that was in the area at the time and two men were taken to the City Police Outpost on Regent Street. The front licence plate is numbered BMM 9875.

Investigators believed that the bus and the men are connected to the injured man.

Police believed the men were Saturday night or early Sunday morning seen in the vicinity of two hotels south of Regent Street.

The Guyana Police Force has since been called in. They have taken the guard and the shotgun as part of the probe