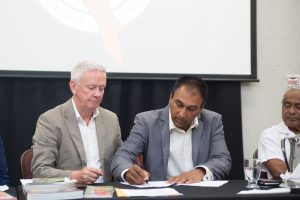 Guyana is set to be the home of a new state of the art golf course. The development of the facility is part of a grander plan to establish a lifestyle community within the Ogle and L.B.I areas, on the East Coast of Demerara. It is touted to provide employment for about 7,000 Guyanese inclusive of former GuySuCo workers.

This was highlighted, today during THAG’s press briefing held at the Roraima Duke Lodge, Duke Street.

Aleem Hussain, President of the Lusignan Golf Club, said the US$100M agreement between the Jack Nicklaus Group and the club is one that will not only bring more attention to sport tourism, but also help to pinpoint the country as a tourist destination due to persons not only entering the country for sporting events, but to experience the culture and arts among other attractions in the country.

Senior International Representative of the Nicklaus Group, Rodney Carl, said this initiative is one that sets the bars high within the Caribbean region and will be capable of hosting world-class events.

“The agenda is to facilitate and create a lifestyle resort establishment that will become a home to many that will come to live here [Guyana]. It will provide a lot of sporting events such as swimming, cycling, tennis among others to both locals and tourists,” Carl explained.

He noted that this agenda will also promote the country’s white sand via the design of the golf course.

Steve Rowan, Managing Director of Earth and Marine Environment Consultants (EAME) said that the project is expected to be phased one and will include the rehabilitation of the Lusignan golf club.

“We will be developing facilities such as an international school, medical facilities and sports grounds via the large project set at US$100Million as the total development cost but part of the cost depends on the mix of assets by future partners,” Rowan was quoted as saying by government’s Department of Public Information. He noted that, while the location chosen seems to be on the outskirts of Georgetown, it will be, at the core, development due to the upcoming oil industry.

According to the Managing Director, a third golf course will also be established to create a golf course destination in Guyana.

Meanwhile, this year’s golf tournament set to tee off on November 3 and 4 will be the largest ever event locally. It will cater to 100 players from 12 countries competing for the country’s Open Title and half of a million dollars in prizes. The title has been held by Guyana for the last 15 years and currently by Champion Avinash Persaud, an eight-time defending champion.

Hussain said that there will be serious challengers from countries such as Columbia, Canada, U.S.A, Barbados, T&T and Jamaica, among others. Close to 100 companies will also attend to display and promote their products and services.

Representation from Motorsport and Women T20 will also be at the event.

The golf tournament will kick off the chain of sporting events slated for the sports awareness month in November.