30 Berbicians to be trained by CGX oil company 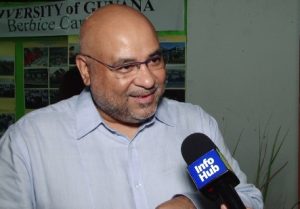 CGX Energy Inc. has announced their intention to contribute to the capacity building of Berbice residents in the oil and gas sector.

Dr. Suresh Narine, Executive Chairman of CGX Energy Inc., announced that 30 Guyanese from the Berbice area will be trained in geo-chemistry. He remarked that the decision comes at the time when the company is moving ahead with Guyana’s first deep water harbour and onshore base, at Crab Island, Berbice.

Dr. Narine said that the company turned down professionally trained Texans and opted to train thirty young Guyanese to do the job.

“Guyana is blessed with all these innovative people, and I am willing to bet that once they have entry into the business they will be making unique contributions to that business as well,” he was quoted as saying by government’s Department of Public Information.

As such, the company is facilitating trainers from the United States of America and Canada to conduct the geo-chemical survey training.

The Executive Chairman said that while the venture will initially be very costly, it is “ultimately a good decision” since there will be “trained local people” readily available for future surveys.

He disclosed that the company is also opened to conducting training in other areas as they arise, noting that they have always tried to retain local content.

The training is expected to commence in a week. It was noted that CGX Energy Inc., will be working closely with the Technical Institutes and University of Guyana’s Tain Campus to select eligible participants.