The announcement was made at the unveiling of International Standards Organisation (ISO9001:2015) standard for Guysons Engineering, the first Guyanese company to have acquired such a standard through the CLBD with assistance from Food Safety Management (FSM). 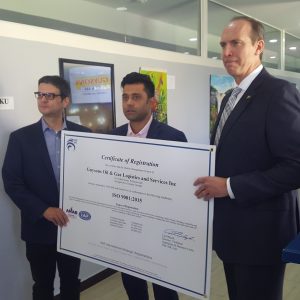 said four other Guyanese companies have already lined up to apply for ISO certification. “Those companies will over the next few months- some of them will be going forward to their audit stage so that’s started and then we have a list of other companies that are interested so we are just working with the industry to figure out how to sequence those in a sense of trying to get the companies that are necessarily needed quickly into the process to try to get them in as quickly as possible,” Henry said.

ExxonMobil’s (Guyana) Operations Manager, Mark Ryan said companies bearing the ISO9001 standard are considered favourably by oil companies. “ExxonMobil and others in the oil and gas industry recognise this standard as somebody that we can work with, that can deliver on commitments. That’s important to us. It is a demonstration of how they can work and how they collaborate with industry. It provides better internal management, increases efficiency and effectiveness of the processes, it improves customer retention and acquisition and it provides consistent outcomes that are measured and monitored,” Ryan said.

Two wholly-owned Guyanese companies under the Guysons Group are banking on their internationally approved quality management and assurance systems to clinch a deals a major United States (US) oil industry company as well as contracts in Brazil, and Trinidad and Tobago.

“For the first time, because of our quality management systems are tendering for internationally-based tenders so we are currently going through tenders for companies in Brazil and in Trinidad and Tobago. That wouldn’t be possible if if it wasn’t for the ISO certification,” said Chief Executive Officer of Guysons Oil and Gas Services, Faizal Khan.

The Centre for Local Business Development played integral roles in preparing Guysons to become the first Guyanese oil and gas service provider to be ISO certified. The company is also pursuing Occupational Safety and Health, and American Petroleum Institute certification.

Khan suggested that his company spent as much as GY$10 million to achieve ISO9001:2015 certification over  a six-month period. That includes labour costs, purchase and installation of new equipment, and health and safety.

He said representatives of his family-owned group would be meeting top officials of the American company in Houston, Texas for talks  “finalise a joint venture with a major international oilfield company” to support Tier 1 operators.

“We are also speaking to internationally-based investors and partners, again, who wanted to see the quality management systems in place at Guysons before they would consider taking discussions further so much so that myself and a group are flying out to Houston, Texas at the end of the this month for a fourth meeting with a major oilfield company who are very interested to move their regional headquarters to Guyana and we hope that Guysons would be that hub for them,” he said. Khan declined to immediately name the company with which negotiations are being held.

The Guysons official urged other Guyanese businesses too achieve ISO certification because “it’s worth it”.

The semi-autonomous Guyana National Bureau of Standards (GNBS) was not involved in granting the ISO9001 standard to Guysons.

Since 1986, Guysons Engineering has been operating a machine shop mainly for the manufacturing and mineral extraction industries such as gold and bauxite mining.