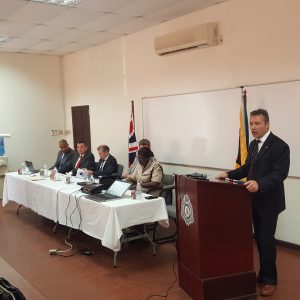 The Adviser to the Guyana Police Force’s Special Organised Crime Unit (SOCU), Dr. Sam Sittlington on Tuesday lamented that a lot of time was being wasted in shuttling files between investigators and legal advisers before charges are laid and some cases are still being lost in the courts.

“There is a lot of time wasted and we don’t need that,” he said at the opening of a United Kingdom-funded course on gathering evidence to ensure successful prosecutions in money laundering and eventual asset recovery.

Sittlington said the time has come for one file going to the Director of Public Prosecutions (DPP) or the Police Legal Adviser and then returned for charges for the accused persons to be arraigned.

“We see a lot of cases getting to court and failing in court. We see failings within the files that go to the DPP (Director of Public Prosecutions). We don’t want files to come back to us for amendments  or corrections,” he said.

The course is being conducted by experts from the Asset Recovery Unit linked to the Barbados-based Regional Security System. “This is a course, which uses the real-life experience of those in the region who have been involved in the prosecution of money laundering cases in the Caribbean,” Quinn said. 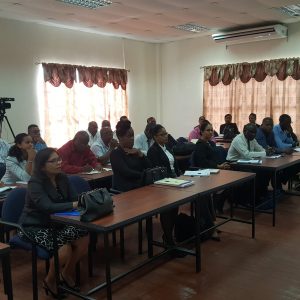 Participants at the opening of the UK-funded training programme on improving evidence gathering for successful money laundering prosecutions and asset recovery.

Noting that money laundering supports a variety of “nefarious criminal activities” such as drug-running, extortion, corruption and terrorism, the British High Commissioner said criminals must know  that jailing them for money laundering is not sufficient.

“It also involves getting criminals where it hurts them most- in their pockets- hence the importance of confiscating assets and of seizing cash. Some may not care about spending time in jail but I’m sure nobody likes their money or their assets,” he said.

The course is part of the UK-funded Security Sector Reform Programme aimed at cracking down on those who steal state assets. “It is also my earnest hope that this training will help all of you course participants to increase your skills and knowledge to allow you to pursue successful prosecutions of those who seek to steal the assets and the funds of the Guyanese people,” he said.