Jimmy Carter is a “friend”, not a “broker” in Guyana’s politics- President Granger 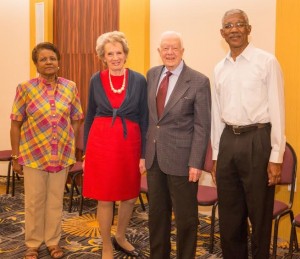 Former United States (US) President, Jimmy Carter, who helped pave the way for the first free and fair elections in almost 30 years back in 1992, is not a negotiator in Guyana’s political arena, President David Granger said Friday.

The Guyanese leader said he and Opposition Leader Bharrat Jagdeo, who are set to hold the first in a series of high-level political talks from next month, could do so without the external involvement of Carter. Granger said he remained “opened” to meeting with the Opposition Leader who represents a substantial portion of Guyanese.

“I don’t need Mr. Carter to tell me that so there is no Carter process taking place  and, as far as I’m concerned, Mr. Jagdeo and I speak the same language and I think we could make progress on our own,” Granger told a news conference held at the Ministry of the Presidency.

Jagdeo’s People’s Progressive Party won 32 seats with 202,694 votes and Granger’s A Partnership for National Unity+Alliance For Change secured victory with 33 seats from 207,200 votes in the May, 2015 general elections. A total of 412,012 were cast.

The President said the former US President, who heads the Carter Center, was not supervising  an “ongoing process or formula”.  “He is not a broker, he is not establishing some new procedure. As a friend of Guyana, he enquired about the process and whether there were any obstacles and I gave him some answers based on the experiences we have had since 2015,” Granger said.

After Jagdeo had expressed concern to Granger that he did not believe that Prime Minister Moses Nagamootoo had the required mandate to make binding decisions on behalf of the coalition government, the President decided that he would lead those talks on behalf of the government. In fact, Nagamootoo has hardly ever been part of the President’s delegation in talks with Jagdeo. Instead, it is either Minister of State, Joseph Harmon, Attorney General Basil Williams or Minister of Natural Resources Raphael Trotman. 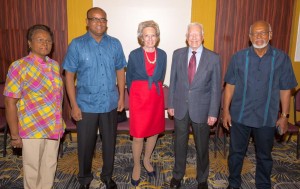 The President has told Jagdeo that he wants to discuss security, the environment and oil and gas. On Friday, the President said he was opened to the agenda being expanded to include campaign financing, reform of the Guyana Elections Commission and ideas-sharing instead of power sharing.

After intensive lobbying for free and fair elections by the then Cheddi Jagan-led opposition People’s Progressive Party (PPP), Carter had brokered key electoral reforms with then President Desmond Hoyte such as the establishment of a seven-member Elections Commission, fresh house-to-house registration, counting of votes at the place of poll and overseas printing of ballots and other material. The PPP went on to win the 1992 elections in what had been internationally certified as the first free and fair elections in 28 years. The defeat of Hoyte’s People’s National Congress (PNC), of which Granger is now leader, had led to a serious falling out with senior party members that had eventually led to the expulsion of then party strongman and former Prime Minister Hamilton Green.

Green eventually rejoined the PNCR and received a national award and special pension as former Prime Minister by the Granger-led administration.

Throughout the decades, the Carter Center had continued to pay keen attention to Guyana’s political, social and economic landscape including participation in the crafting of the now largely abandoned National Development Strategy (NDS).

The Carter Center in the early 2000s had effectively walked away from Guyana because of the apparent intransigence of the then PPP-led administration to forge ahead with greater political cooperation with the then opposition. However, in 2015 Carter himself came here and met with political leaders in the days ahead of the general elections and opted to return to the US hurriedly due to ill health.