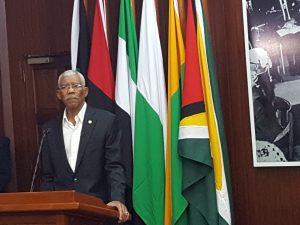 President David Granger on Friday hinted that he would run again in 2020 for the nation’s top elected post if he is chosen.

Granger appeared to suggest that the final decision rests with his People’s National Congress Reform-dominated A Partnership for National Unity (APNU), a loosely-knit grouping of four other smaller political parties.

“Once those processes function, but at present I cannot say what the outcome of those processes will be,” he told reporters at a news conference held at the Ministry of the Presidency. He said democratic processes had seen him having been picked as presidential candidate, Chairman of A Partnership for National Unity and leader of the People’s National Congress Reform.

Well-placed insiders have suggested strongly that the governing coalition’s Presidential candidate might be another senior PNCR politician who could be picked through APNU as a consensus candidate.

The election of Volda Lawrence earlier this month as the Chairperson of the People’s National Congress Reform has resulted in speculation in some quarters that Granger might run again and eventually hand over power to her if the coalition wins again.

The Chairman of the People’s National Congress Reform is the second highest elected post and the office-holder is regarded as the Deputy Leader.

2018-08-31
Denis Chabrol
Previous: Jimmy Carter is a “friend”, not a “broker” in Guyana’s politics- President Granger
Next: OPINION: The return of David Granger-let it be done