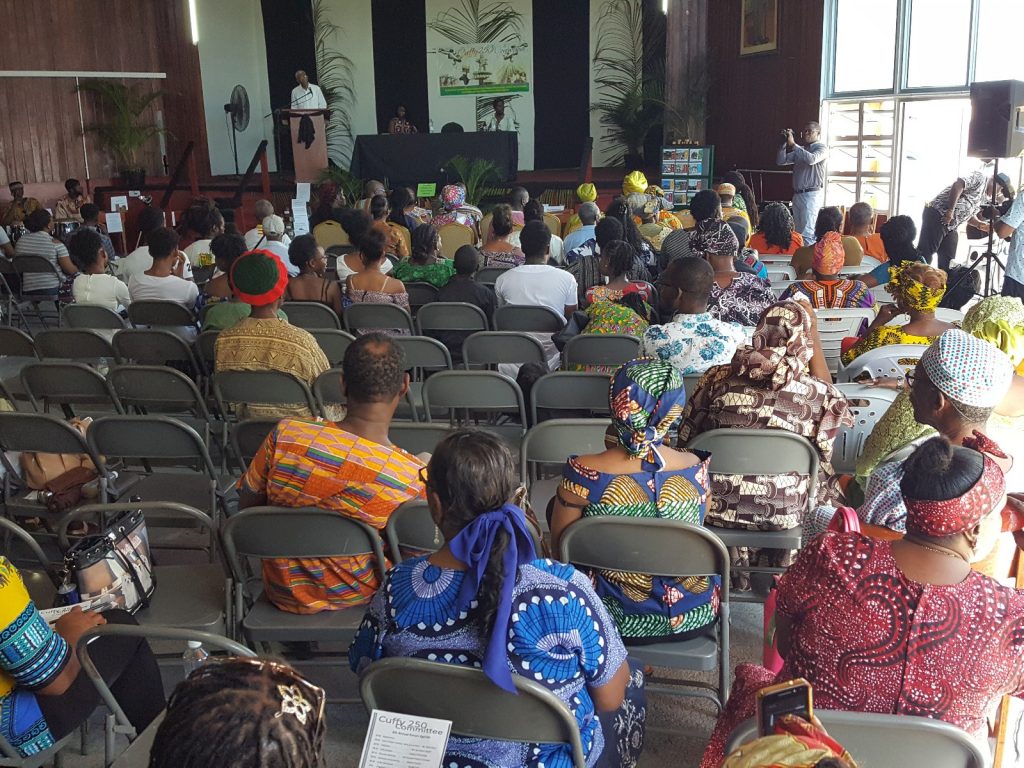 President David Granger in the background addressing the opening of the Cuffy250 Annual State of African Guyanese Forum.

President David Granger on Sunday said his administration was seeking to tackle youth unemployment by pushing mainly technical-vocational education, even as he called on non-governmental organisations to gather solid information on socioeconomic problems with the aim of finding concrete solutions.

“It is for this reason that a lot of emphasis is being placed on education, particularly technical and vocational education, and this is a means of building capacity of getting young people into the world of work, particularly the people who are now being described as NEET- that is young persons who are Not in Education Employment or Training,” he said.

In the past, the more than three-year old coalition-led administration had been accused of not keeping its election campaign promise of creating jobs. Months later, Granger had said that youths should find ways of creating their own jobs to reduce unemployment, a position he reiterated on Sunday.

He noted that Guyana’s total unemployment rate is 12 percent of which 21 percent or 16,000 are youths.

“Unemployment, high as it is, it is being reduced through the promotion of self-employment and I am convinced that most of the young people, if given the training and opportunity, want to work and we must help them with the training and with the resources and the opportunity,” he said. He noted that more than 400 community projects  worth GY$3.7 billion are being financed under the Sustainable Livelihood  and Entrepreneurial Development Project, Community Organised for Restoring the Environment, Amerindian Development Fund and the Basic Needs Trust Fund. Those are in addition to the Linden Enterprise Network, Micro and Small Enterprise Development and the Hinterland Employment and Youth Service that have together received GY$1.2 billion in grants and loans for the benefit of 3,000 young entrepreneurs including start-up businesses. 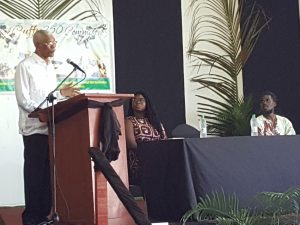 The University of Guyana recently announced that it was about to work closely with technical-vocational educational institutions such as the Guyana Industrial Training Centre and the Government Technical Institute to train workers for the emerging oil and gas sector.

He announced that 42 schools are expected to have practical instruction workshops by 2020 to back-up those that already have Practical Instruction Centres and Departments.

“Robust efforts”, he said, were being made to reduce school absenteeism and improve attendance mainly at public schools. With the provision of 1,111 bicycles, 27 buses and nine boats to transport children to and from schools, he said more children were attending schools free of charge courtesy of civil society and businesses. “More children are now going to school and in some cases children who are spending over forty thousand dollars a month to get to school…so those buses and the joint action by civil society and government have been able to get more children in school but also to put millions of dollars back into the households so parents don’t have to spend the money on transportation,” he said.

The President begged attendees, religious organisations and civic organisations to work together to solve problems that affect mainly young Guyanese instead of engaging in “denialism”. “There have been interventions, not by denying the capability of Guyanese to respond, not by saying that they don’t have any sort of cultural roots or self-esteem but by helping to give them tools, particularly young people, to enable them to become self-reliant, to enable them to develop their self-esteem so there is no culture of blindness.

“I fact, there is a deep cultural perception that once they are given the assistance, they can see the way forward. There is no dumping of the emancipation spirit and they know, too, that they are friends in the community; they are not sinners who are trying to keep them down because of their race but they just want a hands-up to help them to enter the world of work,” he said.

Highlighting the revival of local democracy with the holding of periodic Local Government Elections since 2016 and the creation of more towns- Lethem, Mabaruma, Mahdia, Bartica- so that “people will get in the habit of running their own affairs”, he also cited the need for accurate information to be collected so that the right solutions to problems could be crafted.

Granger recently came in for harsh criticism of his pre-Emancipation Anniversary speech for upbraiding persons for always seeking a ‘raise’ instead of taking advantage of educational opportunities, and self-employment opportunities in agriculture and other sectors.