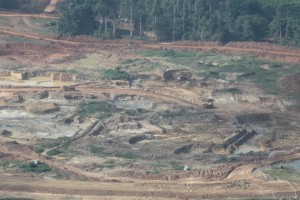 Guyana Goldfields is laying off  more than 80 workers at its Aurora Gold Mines operations in western Guyana, after the company decided to focus on existing gold bearing properties instead of searching for new deposits, a senior company official said Sunday.

Country Manager for Guyana Goldfields, Violet Smith said those being laid off include all the mainly foreign geologists and Guyanese workers who are from the Amerindian communities of  St. Cuthbert’s Mission in the Mahaica River, Santa Mission across the Demerara River from the Cheddi Jagan International Airport and Moruca in the North West District.

Notices were issued to the workers on Thursday, August 23, 2018 that their services would be terminated with effect from August 31, 2018.

She said the company would stand by all of its obligations in keeping with the labour laws as well transfer those who might be needed for the existing gold mining operations.

Smith said the decision was aimed at cutting the company’s operational costs. “To cut costs and the money that you are spending on exploration- we are going underground- it’s really a cost-cutting measure and to divert that money into more Aurora development area,” she told Demerara Waves Online News.

The move to lay off workers came one  month after its founder and Chief Executive Officer, Patrick Sheridan’s services was terminated. He has since been appointed an ordinary director. “With the new change in management, a decision has been made to sort of close off ‘greenfield’ (exploratory) operations. Those that were working on the greenfield will be let go because they are not doing greenfield at the moment. They are concentrating just on the Aurora area,” she said. Sheridan was responsible for exploration.

That brings to an end exploration at Wynamu and Sulphur Rose that had shown small signs of gold, leaving the company to focus on Aurora and use the same facilities if new deposits are found nearby Aurora.

Guyana Goldfields Inc. is a Canadian based gold producer primarily focused on the exploration, development and operation of gold deposits in Guyana, South America.