Hours before the more than 800 delegates marked X on ballots to decide who should become the de facto deputy leader of the People’s National Congress Reform (PNCR), Joseph Harmon was upbeat about romping home to victory but on voting day he emerged as a casualty.

The PNCR’s constitution is clear that if the party leader ceases to hold office for whatever reason, it’s the Chairman who steps up to the top post until Congress elect a new leader as had been the case when Desmond Hoyte died in December 2002 and Robert Corbin took over as interim leader until he was elected in February 2003

From churning out promises for a better life for youths or pledging to work hard to keep the 40-year old Demerara Harbour Bridge even after a new one is built, Harmon hardly missed a beat to make promises and commitments through his office as State Minister.

So what went wrong for Harmon and right for Lawrence?

Political analysts and seasoned PNCR insiders say the 64-year old Harmon did not calculate that several political cannons were fused together to pummel his chances of being a major power broker in not only the three-year old coalition government but also his party.

For Political Scientist, Freddie Kissoon 346 persons- mainly women- voted for Volda Lawrence, possibly because they wanted to take back the PNCR. “Maybe, the vote is a vote against the power establishment because, twist it or turn it, Joe Harmon is de facto President and it may have been a vote against the power establishment who exercise power in a very overt way than I don’t think Lawrence does,” he says. Harmon got 287 votes.

PNCR insiders said Harmon’s friends such as prominent businessman, Brian Tiwarie, whose backing of his campaign was no secret worked against him on voting day. “That was a factor because how the persons sold it that it was these usual suspects are finding their way into the party to multiply their benefits that they used to get under the PPP, through our party, through Harmon thus preventing our hard core supporters from benefiting again,” the longtime PNCR supporter said. Not so long ago did Harmon, as State Minister, attend a string of events organised by the several private sector organisations. A senior business executive even went as far as praising Harmon for “getting things done”. 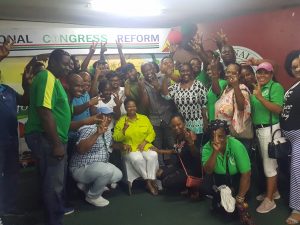 Volda Lawrence (seated) with party supporters moments after she was declared winner of the race for Chairmanship of the PNCR.

For Kissoon, he also thinks that Harmon’s electoral misfortunes date back to his visit to China in 2016 when he had been seen pictured in a plane with Bai Shan Lin executives who had been accused of receiving huge favours by the then People’s Progressive Party-led administration. “When you’re running against that background with someone like a quintessential PNC person like Volda Lawrence, you will be at a disadvantage,” Kissoon tells Demerara Waves.

Dr. Jeffrey shared the feeling that Harmon’s friends were very unhelpful to his ambition of getting closer to one day soon being his party or the coalition’s presidential candidate. “The party seems to have had some sort of problem with Harmon in terms of the people he has been supporting and have been supporting him,” he says.

Harmon, according to a party insider, might have also dropped the ball on Sunday-election day- by failing to work among the comrades to secure their balloted support, especially since he was coming up against Lawrence who is well-known and liked among women and the Amerindian communities.

In addition to murmurs about ex military personnel coming to take over the party, the potent force of women in the face of  Harmon’s relative newness to party politics appeared to have conspired against him. “The women factor was significant because Volda has always remained grounded among the women folk but Harmon made a lot inroads but he dropped the ball on election day. You can’t separate yourself from your followers,” the source said.

Kissoon says, barring any claims of electoral skulduggery, the poll shows that the PNCR is ready for a woman. “The time for women has come for this country and has come for the PNC. Mrs. Janet Jagan was the hegemonic voice for the PPP even when Cheddi Jagan was leader and it’s time the PNC has a woman. I think that pushed Volda Lawrence over the top and gave her the votes,” he says.

Another veteran PNCR politician threw the spotlight on the fact that Lawrence has been head of her party’s Social Services Committee which gave her an automatic shoo-in to deliver goodies and constantly meet and greet party faithful in the communities. In fact, in her victory speech early Monday morning after the results were announced Lawrence made no bones about her capacity rally women. “To our Leader, I say that I will walk side by side with you and I will bring the women with me and we will carry you and we will carry this party onward,” said 55-year old Lawrence, an accountant by profession.

A staunch Harmon supporter who has been associated with numerous campaigns inside and outside the PNCR reasoned that Harmon lost votes because he was hardly seen among Amerindians especially in Region Nine – Upper Takutu/Upper Essequibo and Region One- Barima/Waini. “The fact that he did not visit Regions Nine and One. The Amerindians tend to want to see people..The party comrades have a way that if you don’t go and visit them directly, go to the region and see them, they see it as a kind of a slight,” that political activist says. At the same time, he disagrees that Harmon’s failure to include George Norton, an Amerindian, on his list cost him (Harmon) the chairmanship.

“Ms. Volda is the only person does go to Region Nine and visit the Amerindian communities. Harmon and Basil don’t go anywhere,” a woman remarked as she was leaving Congress Place late Sunday night.

One of the campaign talking points was whether Harmon or Lawrence was ‘more PNC’ , with both of them having gone out of their way to prove how long they were members- Harmon saying he had joined the Young Socialist Movement but later went underground when he enlisted with the Guyana Defence Force. “I think the women factor was the key one and the other one was the false perception that he only came to the party in the recent rather than when he was originated as a YSM member,” the source said, adding that while work was done on the ground to counter that, “a lot of what happens on election day matters”.

Political analyst and commentator, Dr. Henry Jeffrey reasons that that PNCR supporters were more trust worthy of Lawrence who “has been around the hierarchy of the party for a very long time and, in my view, they would want to think that kind of person is in the party to look after party interests.”

Kissoon goes further than just Harmon’s mere recently known association with the PNCR, but says rank and file party members are wary of too many ex-GDF officers on top of  Granger taking over that party. “There may be some sympathies in the essential boardroom of the PNC that Volda Lawrence is more at heart and soul a PNC-ite than Harmon. A lot of people view Granger, himself, and his military boys as military people who just came to the fray,” he reasons.

Dr. Jeffrey shares the view that a lot of political parties are not entirely welcoming of ex soldiers, a move that voters at the PNCR’s 20th Biennial Delegates Congress sought to put brake on through the ballot. “Most political parties, I think, tend to take that thought of line that you don’t want the military to be dominant in any political organisation and the military has been quite visible with the APNU and PNC, but I don’t think it has to do with intolerance but may have to do with Harmon himself; they believing the party needs to be in safer hands that they are accustomed to,” he says.

Outgoing PNCR Chairman, Basil Williams, in Kissoon’s view, has lost his stripes a little over three years since the coalition took power with a one-seat majority. “I think it’s the old, old saying at work. You could be radical in opposition but when you get into government, people see your true colours and I think Basil Williams, as a power-holder, after 2015 has damaged his credibility by his sheer performance, the controversies, the attitudes- that isn’t going to go down well,” he said.